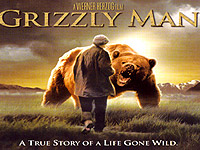 Music for the Wild
For thirteen years Timothy Treadwell chose to live among the grizzlies deep in the wilds of Alaska. Treadwell filmed the bears—and himself—continuously, ignoring warnings that he was putting his life in danger. Obsessed with protecting the bears, over time his narration became more passionate and more paranoid, until it seemed that Treadwell identified more with the bears than with his own kind. Finally in October 2003, Treadwell and his lover, a fellow activist Amie Huguenard were attacked, killed, and eaten by the bears they wanted so badly to preserve. In the documentary Grizzly Man, German film director Werner Herzog adds interviews and narration to the footage Treadwell shot to tell his story.

The film is interesting by itself, a beautifully crafted documentary about a species of bear that is equally fascinating, majestic, and frightening. Grizzly Man is also about a deeply troubled man who ends up being, no pun intended, consumed by a passion to save these creatures from the predations of humankind.

Equally interesting is a feature included on the DVD of Grizzly Man. “In the Edges: The Grizzly Man Sessions,” is a 50 minute documentary on the making of the music for the film. Herzog gathered a talented group of musicians in a studio under the leadership of British guitarist and song-writer Richard Thompson. Herzog would show them a section of the film and explain what he wanted. The musicians would then begin to jam, and in the unfolding conversation between them and Herzog over a period of two days, the musical score for the film was composed.

For those of us who love music but are not musicians, “In the Edges” is a rare glimpse into the world of artistic creation. We get to watch and listen as gifted artists work together for a common purpose. It is a study of collaboration, the blending of different musical instruments to make the unfolding story told in a film take on a deeper sense of reality.

We recommend Grizzly Man and “In the Edges” to you. The music is also available on CD, which is worth having as well.

1. Did you notice the musical score the first time you watched Grizzly Man (before watching “In the Edges”)? What did you notice? What was your response to it?

2. What is your first impression of “In the Edges”? Why do you think you responded this way?

3. What form of creativity do you express? How have you nurtured it?

4. Does the score of Grizzly Man increase or decrease the effectiveness of the film? How would you describe the relationship between a film and its score?

5. How did seeing “In the Edges” affect your view of Grizzly Man? Of Herzog’s ability, as a film director to capture in words what he wanted expressed in music? Of the musicians ability to create on-the-fly?

6. How can beauty, in the musical score and film footage, co-exist with danger and horror in the unfolding of Treadwell’s tragic story?

7. What passion gives purpose to your life? How do you maintain a proper balance in life without quenching the passion?

8. To what extent do you care for the earth? What plans should you make?