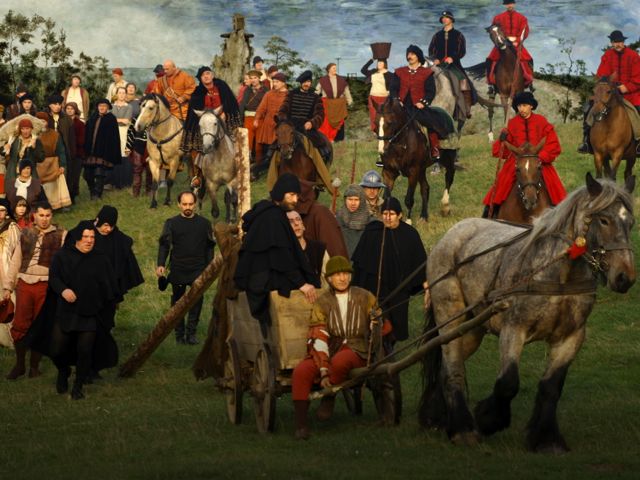 The story in a painting
In 1564, the Flemish artist Pieter Bruegel the Elder (1525-1569), painted The Procession to Calvary (or The Way to Calvary, depending on the translation) for his wealthy patron, Nicholas Jonghelinck. The work is large, oil on panel measuring 4 feet by 5.6 feet (124 cm × 170 cm). At the top of the painting stands a mill on an impossibly high promontory of sheer rock, the source of bread watching over a sprawling landscape. That landscape is filled with busy ordinary life, and includes if you look carefully enough, over 500 characters in a variety of settings and activities—historically accurate—common to everyday life in Bruegel’s world.

In a remarkable exercise in cinematic art, in The Mill and the Cross (2011) Polish director Lech Majewski takes us into the painting section by section, allowing each scene to come alive as Bruegel might have seen it as he composed his great work. The film is highly stylized, and contains almost no dialogue as we watch Bruegel (played by Rutger Hauer) sketch out The Procession to Calvary and explain details to Jonghelinck (played by Michael York). The essence of the film is not its plot (there really is none), but rather its invitation to join an unhurried meditation, a creative exercise in art interpretation, unfolding the stories of ordinary life that are implied in the details of Bruegel’s painting.

Flanders was in turmoil in Bruegel’s day. The region was ruled by Spain, who inflicted a regime of brutal repression on the Flemish people. The ideas of the Protestant Reformation had found fertile ground in Holland, but King Philip II saw himself as a champion of Catholicism, determined to stamp out those he deemed heretics. Flemish men who ran afoul of the red-coated Spanish authorities were crucified, or beaten and whipped and left exposed for a feast for crows on wheels fastened to the tops of high poles. Flemish women so accused were simply buried alive. In such a setting, the suffering of Christ was embraced not merely as a religious belief but as a metaphor for life, a reason for hope, and source of meaning.

Central to The Procession to Calvary is a depiction of Christ carrying his cross, but instead of Roman soldiers with whips, there are red-coated Spanish mercenaries. Though this is central in the painting, it is not the focus, since that would have likely caused Bruegel’s work to be seen as subversive by the Spanish authorities. Spreading out from this central motif are a variety of scenes of Flemish life, ordinary moments made extraordinary because they are seen in light of Christ’s suffering, historical moments given significance because a greater moment had transpired, forever changing history. It is these details that The Mill and the Cross bring alive. We see scenes of ordinary life slowly unfolding, and then suddenly frozen and absorbed into Bruegel’s work.

Do not watch The Mill and the Cross expecting to follow a story, or to enter an adventure. Watch it a series of living snapshots of life in Flanders in the 16th century, celebrated by a great artist and given meaning by Christ’s death. The film’s scenes will be permanently emblazoned in your imagination, you will see Bruegel’s painting differently, and you will be made to think.