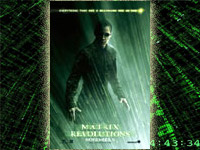 So, did you like it?” I’m often asked that question about movies, and I always find it difficult to answer. I find it difficult because the category of like doesn’t contain enough nuance to get to the heart of the matter. The best films, like all good works of art, are multilayered, and the layers may elicit very different responses. So my answer is usually longer than expected—or desired, probably—and more complex than the simple question seems to warrant. “Yeah,” some say when I’m finally done, “but did you like it?”

More important, whether I liked it or not, The Matrix trilogy is significant because it captured the imagination of an entire generation. And the films raise issues and questions that matter. Though Reloaded and Revolutions complete the story of the war of the machines against Zion, The Matrix remains the strongest film of the three. I like the way it questions the difference between reality and illusion, insists there is something wrong with the world and that humans can be enslaved without knowing it, and that the only hope is in a savior. It reminds us that though technology is an indispensable part of our lives, it is also a threat to our humanity. It set a new standard in cinematic technique while maintaining an almost perfect balance of dialogue, myth, and action.

I like much of the furious action of Reloaded, but dislike how some of the scenes went on so long as to strain plausibility. Its introduction of neo-pagan themes and images are an important addition to the trilogy, but overall it is thin as a film.

I like Revolutions as a finely crafted action film, but dislike the surprisingly wooden dialogue. I like the computer-driven special effects—the noisy, relentless, burrowing onslaught of the machines against Zion is deliciously frightening—but dislike how the action seems to have overwhelmed the exploration of ideas begun in the first film. I like how Andy and Larry Wachowski didn’t just make cinematic history through advances in technology, but in their depiction of the heroic. The films include people of color as noble characters, and depicts women not just as sexual decorations but as strong, heroic figures crucial to the plot. I like how the film ends without all the questions neatly answered, but dislike how weak the ending is in implying that hope is possible even if we can’t be sure whether we live in reality or are forever lost in an empty illusion.

In the end of Revolutions, evil is defeated, so rather than remaining imprisoned in fear in dark caverns deep within the earth, Neo’s victory opens the door to life in a celestial city blazing with the light of a glorious dawn. In true pluralistic fashion, more aspects of the Christ Story are stirred in with notions from a myriad world views to shape a myth for a postmodern world. So, for example, Neo’s victory over Agent Smith is finally incarnational. The soldiers of Zion must fight, but the war is won not by their efforts, but by their savior on their behalf.

Yet, even within the world of The Matrix, there is something unsettling and insufficient about this final victory, given the depth of the questions that the films have raised. Are we to assume there is no final distinction between reality and illusion? That there is no true word from outside, since the Oracle is as much caught in the problem as we are? That freedom is always limited and temporary, a brief respite before the next round of hostility and death? That there is no reason to hope that someday a final consummation is possible that will include a dawn of righteousness that never ends? Is history moving somewhere, or forever stalled in an endless cycle which is more like reincarnation than resurrection?

These answers suggested by Revolutions must be engaged seriously even though from a biblical perspective they are weak. Francis Schaeffer always insisted that we never need fear engaging world views that are alternatives to the Christian world view. We will always find points of contact, because people are made in God’s image and live in the cosmos called into being by the Creator. And we will always find weaknesses, fatal flaws, since no story answers the Big Questions of life as fully, as plausibly, and as satisfactorily as does The Story revealed in Christ and Scripture.

That is no reason for pride (since it’s not our doing), nor reason to disdain the alternative world views (since we too, on this side of glory, see only in part). It is reason for gratitude, for humility, and for a holy spirited determination to find a creative and winsome way to engage The Matrix generation’s story with The Story in a way they might be able to hear and understand. In Revolutions we are told that “Everything that has a beginning has an end,” but I hope that doesn’t apply to the discussion of the questions the trilogy has raised. They are too important to be dropped.

1. Did Denis like The Matrix Revolutions? Did you? What was your initial reaction to the film? To the trilogy? Why did you react that way? 2. What is the message(s) of the film(s)? Consider such themes as: the nature of reality or what is really real; what’s wrong with the world, and what’s the solution; the fragmentation of life; the significance of relationships and love; the significance and meaning of being human; the meaning of technology; the meaning of life and history; and the possibility of transcendence. 3. What is attractive here? How is it made attractive? Where do you agree? Where do you disagree? Why? In the areas in which we might disagree, how can we talk about and demonstrate the truth in a winsome and creative way in our pluralistic culture? 4. Identify the aspects of Christian symbolism that are woven into the film(s). What hints, ideas or values are brought in from other world views? If you have difficulty identifying these things, what plans might be good to make to strengthen your ability to discern such things? 5. Compare and contrast how your non-Christian and your Christian friends react to the film(s). 6. In what ways were the techniques of film-making (lighting, casting, direction, script, music, sets, action, cinematography, editing, etc.) used to get the film’s message(s) across, or to make the message plausible or compelling? In what ways were they in ineffective or misused? What scenes are particularly striking to you? Why? 7. With whom did you identify in the film? Why? With whom were we meant to identify? Discuss each main character in the film and their significance to the story. 8. Morpheus, so central in The Matrix, recedes in importance in Revolutions—why is this? 9. What insight does the film give into the way postmodern people see life, meaning, and reality? How can you use the film as a useful window of insight for Christians to better understand our non-Christian friends and neighbors? 10. Might the film be a useful point of contact for discussion with non-Christians? What plans should you make?