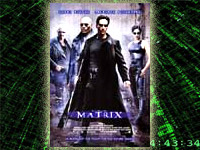 The Matrix had been in theaters about a month when I asked some high schoolers who attend our church whether they had seen it. “Have I seen it?” one of them responded, making clear by his inflection that I should have known the answer. “I’ve seen it six times.” The others chimed in without being asked, each one saying how many times he’d seen the movie. One seemed a bit embarrassed when it was his turn to speak: he’d only seen it three times. “So far,” he added, in order to explain, I suppose, his cultural slackness. They were not only all eager to see The Matrix again (two of them went with me to see it the following week), they were eager to talk about it. “That’s why I like it so much,” one of them commented. “It made me think.”

A smartly crafted science fiction action thriller, The Matrix is one of the most self-consciously religious/philosophical films to be released in recent years. Widely criticized as the film which provoked the horrifying shooting at Columbine High School in Littleton, CO, it is a creative and thoughtful warning about the siren call of virtual reality. Reality is often unpleasant, and life in the real world may be painfully difficult, but escaping into the fantasy of virtual reality is an insufficient solution to the dilemma we face as human beings.

The plot is a variation on a classic science fiction theme: “man versus machine.” Set at some unspecified (and unknowable) date in the future, the world has been taken over by an all-encompassing computer program called the Matrix. The product of human creativity, the Matrix was originally designed to serve humankind, but Artificial Intelligence progressed until the servant became the master. In a desperate attempt to regain control by cutting off the computer’s energy source, nuclear weaponry was used to obliterate the sun’s light, wreaking havoc on the earth. The attempt failed, for the Matrix simply began using human beings as its energy source, harvesting them in glass containers in vast warehouses. Humans, the living batteries (“copper tops”) that power the Matrix, are plugged into the network, which provides them with not only their basic bodily needs, but also with a make-believe world, a software virtual reality in which they “live” out their lives.

All hope is not lost, however, since a few people escaped enslavement. Led by Morpheus in his rusty but worthy ship, the Nebuchadnezzar, this renegade band roams the dark sewers of the earth seeking the One who will bring freedom to the human race, saving them from their bondage. “The Matrix is everywhere,” Morpheus tells Neo. “It is all around us. Even now, in this very room. You can see it when you look out your window, or when you turn on your television. You can feel it when you go to work, when you go to church, when you pay your taxes. It is the world that has been pulled over your eyes to blind you from the truth…that you are a slave, Neo. Like everyone else, you were born into bondage…”

Morpheus, Trinity, Neo and the others are dogged by agents, mere constructs of the Matrix, extensions of the machine, who are so powerful no human has ever resisted them and survived. Unrelenting in their pursuit, the agents are contemptuous of humanity and eager to destroy Zion, the last, hidden safe haven of the human race. “I’d like to share a revelation that I’ve had,” agent Smith says to Morpheus. “It came to me when I tried to classify your species. I realized that you’re not actually mammals. Every mammal on this planet instinctively develops a natural equilibrium with the surrounding environment, but you humans do not. You move to an area, and you multiply, and multiply, until every natural resource is consumed. The only way you can survive is to spread to another area. There is another organism on this planet that follows the same pattern. A virus. Human beings are a disease, a cancer of this planet, you are a plague, and we are the cure.”

After being freed—unplugged—from his glass tube in the battery warehouse, Neo is mentored by Morpheus, who introduces him to reality, to life outside the Matrix. “You have the look of a man who accepts what he sees because he is expecting to wake up,” Morpheus tells Neo. “Ironically, that’s not far from the truth.” As part of this training, Neo is taken to the Oracle, one of the most interesting characters in the entire movie. Finally, in the end, Neo is confronted with the question on which everything depends: is he willing to lay down his life for his friends.

Though some may wish to skip this film, The Matrix is perhaps the best movie to be released in 1999, and certainly ranks among the most thoughtful of science fiction films. Like Blade Runner, 2001: A Space Odyssey, and A Clockwork Orange, it raises important issues, and invites reflection on the big questions of life. The Matrix is so well made as a film and so compelling in its story that several breaks in the action occur to allow for rather extended philosophical discussions—without the audience losing interest. This was what so intrigued my high school friends. They were eager to discuss the religious—actually, Christian—symbolism woven throughout the plot, the interplay between reality and virtual reality, and whether anything was worth dying for in our fragmented world.

The Matrix not only invites thoughtful discussion, it’s a provocative statement on the appeal of virtual reality which should resonate with everyone who confesses belief in the Creator who reveals himself in the reality he called out of nothing.

1. What was your initial or immediate reaction to the film? Why do you think you reacted that way?

3. In what ways were the techniques of film-making (casting, direction, script, music, sets, action, cinematography, editing, etc.) used to get the film's message across, or to make the message plausible or compelling?

4. With whom did you identify in the film? Why? With whom were we meant to identify?

5. What religious symbolism did the Wachowski brothers weave into the story? What is its significance?

6. What did you notice about the way violence was depicted in the film? What is the significance of this stylization?

7. One of the most delightful aspects of The Matrix involves Neo’s enigmatic—yet crucial—encounter with the Oracle. When he first steps into her kitchen, for example, the following dialogue ensues:
Oracle: I’d ask you to sit down, but, you’re not going to anyway. And don’t worry about the vase.
Neo: What vase?
[Neo turns to look for a vase, and as he does, he knocks over a vase of flowers, which shatters on the floor.]
Oracle: That vase.
Neo: I’m sorry...
Oracle: I said don’t worry about it. I’ll get one of my kids to fix it.
Neo: How did you know?
Oracle: Oh, what’s really going to bake your noodle later on is, would you still have broken it if I hadn’t said anything?

9. How is The Matrix a comment on reality versus virtual reality? In one of the many discussions of reality in the film, Morpheus says, “Have you ever had a dream, Neo, that you were so sure was real? What if you were unable to wake from that dream? How would you know the difference between the dream world and the real world?” What is the significance of this concept to the story of The Matrix? What is a Christian response?

10. The Matrix has been criticized in light of the tragedy at Columbine High School. For example, when Neo and Trinity enter the Matrix to save Morpheus in a violent shootout, they wear black trench coats similar to those worn by Eric Harris and Dylan Klebold, Littleton’s teenage shooters. How would you respond to this criticism?

“Liberated by Reality,” a review of The Matrix in light of Columbine by Tony Jones in Books & Culture: A Christian Review (September/October 1999) p. 27.