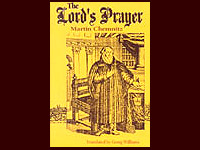 Martin Chemnitz may not be well-known outside of Lutheran circles, but he was an important figure in the Protestant Reformation. Known as the “second Martin,” Chemnitz not only followed in Luther’s footsteps, he is credited by historians with rescuing the Lutheran stream of reform from dying out. “After Luther’s death,” translator Georg Williams writes, “the Lutheran movement drifted into such theological and political diversity that this disarray eventually would have led to its fragmentation and demise. Chemnitz stepped into this arena with his deliberate, systematic, and pastoral method and became a major force in the unification that was achieved in the Formula of Concord. Without his efforts, much of the Lutheran realm would have fallen into such confusion that soon Roman tradition would have once again dominated European Christianity.”

The Lord’s Prayer by Martin Chemnitz allows us to listen in as this 16th century Lutheran pastor and theologian teaches on the Lord’s Prayer, phrase by phrase. Here, for example, are a couple of sentences from Chemnitz’s chapter on “who art in heaven” which will give you the flavor of the work.

“When we say ‘Our Father,’ we by faith think about the readiness, willingness, and eagerness of God to help us. When we add ‘who art in heaven,’ we add to the good will of God the following 1) divine power, that having all things in his power he is able to do and to give those things we ask; 2) divine providence, that seeing and knowing our wants, he is aware of our requests and hears the same; that he cares for us; that he orders, disposes, administers, and governs all things, especially all things in his Church; 3) divine wisdom, that he knows the way to send help and deliverance; and 4) divine rule and dominion, that it belongs to the kingdom and office of him who dwells in heaven to hear our prayers, to regard our affairs, to help, to deliver.”

Those of you who are aware of the tendency of authors in Chemnitz’s day to give their books very long titles might suspect The Lord’s Prayer is not the original title. Your suspicion is warranted. Though Chemnitz’s original Latin version has been lost, the work was published in English by the University of Cambridge in 1598 as A Substantial and Godly Exposition of the Prayer Commonly Called the Lord’s Prayer. Still, long title or short, this brief study is both a good reminder of the wonderful grace God has granted his people in calling us to a life of faithful prayer, and a thoughtful exposition of how Christ taught us to pray.

The Second Martin: The Life and Theology of Martin Chemnitz is the first biography of Chemnitz to be published in English, and is by the former president of the Lutheran Church/Missouri Synod, who has become intimately acquainted with the Reformer by translating some of Chemnitz’s 65 works into English over the past three decades.

The Second Martin is a scholarly biography, with a far greater emphasis on Chemnitz’s thought and theology than on the details of his life and times. Chemnitz was a modest man, leaving a professorship at Wittenburg to assume a far less prestigious position in Brunswick, where he remained for the rest of his life as a pastor. He traveled extensively, wrote tirelessly, trained and encouraged men for the pastorate, and defended Lutheranism at a time when both Roman Catholicism and Calvinism seemed to threaten the movement. “Chemnitz did not hesitate in the defense of the truth and of Lutheran theology,” Preus writes, “to enter into theological dialogs and controversies with anyone.” Well-read, a devoted father and husband, Chemnitz was so deeply loved by his congregation that they never released him to accept another call. With none of the earthiness for which Luther is well known, no hint of scandal ever tainted his reputation. Often ill, he served faithfully until his death in 1586 at the age of 63.

The Second Martin is not light reading, but it is a good introduction to Lutheranism, to the great debates of the Reformation, and to a man who should be remembered and honored as a pastor, theologian, and Reformer of integrity and courage.