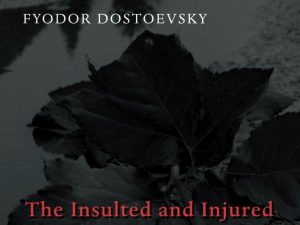 A world of wicked self-interest
Good stories—really good stories—touch on the deepest questions and yearnings of the human condition. The story may be set long ago, told in a style utterly unlike our generation’s preferences, and peopled with characters that speak and act in ways foreign to us, but if it is a truly good story we recognize our selves in it. The limited horizon of the space and time that we inhabit is mysteriously transcended by what unfolds in the novel, and suddenly a glimpse of something far more rooted shines through. The shadows that cover this broken world are pushed back just a bit and the possibility of truth, beauty and righteousness is made clearer.

In 1861 a Russian writer named Fyodor Dostoevsky, who would go on to write Crime and Punishment and The Brothers Karamazov, published a story, The Insulted and Injured, after a period of exile in Siberia. It appeared first as a serial in a magazine, and later in book form. Central to The Insulted and Injured is a prince, Pyotr Aleksandrovich Valkovsky, who believes the only rational meaning in life is found in personal self-interest. That in this tenuous existence the only thing we can be certain of is our self, which means that maximizing personal gain in our choices, actions, and relationships is the only standard by which to live. The thing we can know that really exists, he argues, that is not “nonsense… is personality—myself. All is for me—the whole world is created for me.” Anything and everyone that does not result in personal gain can be set aside, should be set aside without guilt and without hesitation, because there is only one life to live, and it will be over before we know it. Dostoevsky has nothing but disdain for such egoism, and The Insulted and Injured reveals it as not merely misguided or misinformed, but deeply evil.

The Insulted and Injured is not a frivolous novel, but a serious one, full of convoluted plot, numerous characters with numerous names, long dialogues and lengthy descriptions, and a sense of passion throughout. It is, after all, a classic Russian novel. And it is about more than refuting egoism, since Dostoevsky is concerned to not just reveal the wickedness of self-interest in a fallen world but to point to the possibility of true humanness and hope.

I crossed the street, went up to the house, and read the inscription on the iron plate over the gate: “The house of Bubnova, a woman of the middle class.”
But I had scarcely deciphered the inscription when suddenly I heard a piercing female scream in the courtyard, followed by shouts of abuse. I peered through the gate. On the wooden steps of the house stood a fat rough-looking woman, dressed like a lower-class person, with a kerchief at her head, and wearing a green shawl. Her face was a revolting purplish color. Her small, puffy, bloodshot eyes were gleaming with spite. It was obvious she wasn’t sober, though it was early in the day. She was shrieking at poor Elena, who stood petrified before her with the cup in her hands. A disheveled female creature, painted and rouged, peered from behind the purple-faced woman on the stairs. A little later, a door opened onto a staircase leading down from the ground floor to the basement, and a poorly dressed, middle-aged woman of decent and modest appearance came out, probably attracted by the shouting. The other inhabitants of the basement, a decrepit-looking old man and a girl, peered out from the half-opened door. A big, hulking peasant, probably the porter, stood in the middle of the yard with a broom in his hand and looked lazily at the whole scene.

“You damned snake, you bloodsucker, you louse!” squealed the woman, emitting in one breath all her store of abuse, for the most part without commas or periods, but with a sort of gasp. “So this is how you repay me for my care of you, you ragged bitch! All I did was send her for cucumbers, and she slinks off! My heart felt she’d slink off when I was sending her! My heart was aching, aching! Only yesterday evening I all but pulled her hair out for it, and here she runs off again today! And where is it you go, you slut? Where do you go? Who do you go to, you damned mummy, you goggle-eyed viper, you poisonous vermin, who—who is it? Speak, you filthy scum, or I’ll strangle you where you stand!” And the frenzied shrew threw herself at the poor girl, but seeing that the woman of decent appearance was looking at her, she suddenly checked herself and, addressing her, squealed more shrilly than ever, waving her arms as if calling her to witness the monstrous crime of her poor victim.

“Her mother croaked! You all know, good people, that she was left all alone, like a pimple on the earth. I saw she was on your hands, poor folks as you are, though you yourselves had nothing to eat. ‘There,’ thought I, ‘for St. Nicholas’s sake I’ll put myself out and take in the orphan.’ So I took her in. And, what do you think? Here I’ve been keeping her these two months, and she’s drunk up all my blood and eaten my white flesh! This leech! This rattlesnake! This obstinate satan! She just remains silent. You can beat her, you can throw her down the stairs—she just remains silent! It’s as if she’s filled her mouth with water, the way she remains silent! She rends my heart the way she remains silent! What do you take yourself for, you saucy slut, you green monkey? If it hadn’t been for me, you’d have dropped dead of hunger in the street. You should wash my feet and drink the water, you monster, you black French sword! You’d have dropped dead like a dog if not for me!”

I am aware that some scholars have questioned the reality of Dostoevsky’s faith while others have celebrated it. I have no expertise in his life and work that could possibly enable me to comment knowledgably on that debate, to say nothing of settling the issue. For what it is worth his novels have always seemed to evoke a deep Christian consciousness in my mind and imagination, shaped of course by the Eastern Orthodox tradition. I would argue that Dostoevsky’s careful development of characters in his stories who hold differing and even opposing worldviews prove him to be a keen and careful observer who was a skilled craftsman in making his characters come to life. The rich complexity of ideas, the nature of belief, disbelief, and doubt, and the inescapable way the consequences of what we believe shapes our life for blessing or for curse comes through in his novels with all the profundity of the reality within which we live and move and have our being. This reality is questioned in our postmodern world, and Dostoevsky’s work as a result continues to speak with prophetic urgency.

This new translation is by Boris Jakim, a man who has translated numerous books from Russian into English, including Notes from the Underground, also by Dostoevsky, and several works of Eastern Orthodox theology and devotion.