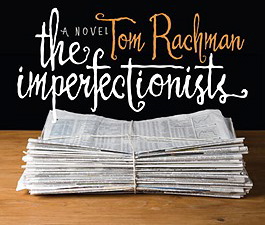 Lives barely connected, unwinding
I doubt The Imperfectionists will be remembered as the defining novel of the early 21st century. It is, however, a good read, full of humor, surprise, and insight—insight into the human condition and our postmodern world. The plot centers on a once great newspaper now in decline, though noting that is misleading. The story is not really about that newspaper or about the changes occurring today as digital media challenges the dominance of print. It is about the very flawed people caught in this transition, people yearning for love and meaning and a sense of significance who are more like us than we probably would care to confess.

In The Imperfectionists, journalist Tom Rachman’s debut novel, we enter the world of a dying newspaper, each character in the novel playing some role in its publication—from editor to financial officer to reporter to reader to obituary writer. The novel is divided into eleven chapters, one for each of eleven characters. Each character is different, considered singly so that each chapter almost seems to be a short story, yet each character’s story intersects with the newspaper and thus with one another in both obvious and surprising ways. The Imperfectionists is the story of eleven flawed people who wonder where meaning can be found in a world so badly broken that even old certainties seem uncertain.

Arthur’s cubicle used to be near the watercooler, but the bosses tired of having to chat with him each time they got thirsty. So the watercooler stayed and he was moved. Now his desk is in a distant corner, as far from the locus of power as possible but nearer the cupboard of pens, which is a consolation.

He arrives at work, flops into his rolling chair, and remains still. This persists until inertia and continued employment cease to be mutually tenable, at which point he wriggles off his overcoat, flicks on the computer, and checks the latest news reports.

No one has died. Or, rather, 107 people have in the previous minute, 154,000 in the past day, and 1,078,000 in the past week. But no one who matters. That’s good—it has been nine days since his last obit, and he hopes to extend the streak. His overarching goal at the paper is indolence, to publish as infrequently as possible, and to sneak away when no one is looking. He is realizing these professional ambitions spectacularly.

Arthur Gopal writes obituaries for a living, little summaries of lives after they have ceased living, about people he does not know and does not really care about except as a way to make a living in a way that seems petty, caught up in office politics over pieces of writing that do not seem to matter. It is a credit to Rachman’s giftedness as a storyteller that I cared about Arthur, and about the other very imperfect characters that populate The Imperfectionists.