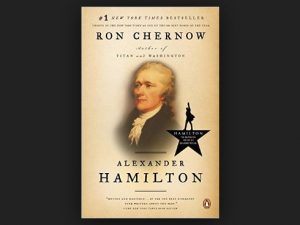 I decided to read Alexander Hamilton when I heard it was an excellent biography, that author Ron Chernow combined the careful research of a scholar with an ability to write history in prose that made readers feel they had been transported back in time. That was enough to put the book on my to-be-read list. When I learned the book had inspired Lin-Manuel Miranda to write his award winning and immensely popular Broadway musical, Hamilton, Chernow’s biography was promoted to my to-be-read-now list. There are several reasons I would commend it to you.

First, the rumors about Chernow’s excellence as an author are not exaggerated. This is a well-written, meticulously researched piece of history that tells a story worth reading just for the delight of it. Much of Hamilton’s life is simply improbable, but it actually happened.

Second, conflicting versions of the American Story are heard in the marketplace of ideas, and every version includes some take on the founding fathers. Every political persuasion seems to be persuaded that their opponents misread what the founders said, or intended, or believed, which complicates our national dialogue because it implies that if you disagree with me you are not just wrong, but un-American. Reading Alexander Hamilton was a wonderful way to learn about the founders—and I learned a lot, including a great deal that requires me to think in fresh ways about the American Story.

Alexander Hamilton, a penniless immigrant from the British West Indies, rose to become the indispensible aide to George Washington in the Revolutionary War and then Treasury Secretary in his cabinet when Washington served as the nation’s first president. Gifted with indefatigable energy, intelligence, impeccable political sense, and superb management skills, Hamilton essentially crafted the American political and economic system that still operates today.

In all probability, Hamilton is the foremost political figure in American history who never attained the presidency, yet he probably had a much deeper and more lasting impact than many who did. Hamilton was the supreme double threat among the founding fathers, at once thinker and doer, sparkling theoretician and masterful executive. He and James Madison were the prime movers behind the summoning of the Constitutional Convention and the chief authors of that classic gloss on the national charter, The Federalist, which Hamilton supervised. As the first treasury secretary and principal architect of the new government, Hamilton took constitutional principles and infused them with expansive life, turning abstractions into institutional realities. He had a pragmatic mind that minted comprehensive programs. In contriving the smoothly running machinery of a modern nation-state-including a budget system, a funded debt, a tax system, a central bank, a customs service, and a coast guard—and justifying them in some of America’s most influential state papers, he set a high-water mark for administrative competence that has never been equaled. If Jefferson provided the essential poetry of American political discourse, Hamilton established the prose of American statecraft. No other founder articulated such a clear and prescient vision of America’s future political, military, and economic strength or crafted such ingenious mechanisms to bind the nation together. (p. 4)

The story Chernow tells in Alexander Hamilton surprised me by sounding like it was ripped from today’s headlines. It is a story of inspired nation building and wretched wickedness, a story to make one proud to be an American yet aware of so much for which we need to repent. Sadly, it shows that even at America’s founding we had a financial system sullied with rapacious greed and risky economic speculation, leaders of moral laxity, vicious rhetoric in political campaigns, violence and warfare, and duplicitous politicians who demonized opponents.

Alexander Hamilton was a gifted and fallen human being who did far more in his short life (he died in a duel with Vice President Aaron Burr when he was 49) than most people could even imagine. He was one of those rare individuals whose gifts surpasses the average person and who seems to appear in history at precisely the right moment and in precisely the right place to best make use of them.

If you want to understand the American Story you need to know the story of this amazing founding father. I recommend Alexander Hamilton to you.