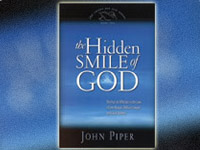 The writer of Hebrews twice instructs us to “imitate” the faith of those who have gone before us and whose lives have been marked by grace (6:12; 13:7). Good biographies can help us be faithful to that command. They also remind us that if God is willing to use such imperfect servants, perhaps there is some small chance that he is willing to use us as well. With that in mind, we commend these five biographies to you.

“John Newton: The Tough Roots of His Habitual Tenderness,” a lecture by John Piper
On New Year’s Day, 1753, at the age of 28, John Newton wrote out what he called his “ultimate desire” for his life: “to make it the end and aim of my life (as it is the privilege and perfection of my nature) to obtain fellowship and communion with God the Father and with his son Jesus Christ.” Newton’s passion for the truth of the gospel was evident in his life, his labor as a pastor, and in the hundreds of hymns he composed.

Never one to sentimentalize sin or to forget the wonder of grace, Newton looked back on his life with unrelenting realism. Raised in a non-Christian home, he took to the sea, lived a rough life of careless decadence and before long was captain of a ship engaged in the horrific trade of human flesh. “I know not,” he once commented, “that I have ever since met so daring a blasphemer.” As a pastor, though, he was remarkably gentle and patient, tender because God had been tender with him. Newton reflected on such Christian humility with the keen insight and word-craftsmanship of a poet: “A company of travelers fall into a pit: one of them gets a passenger to draw him out. Now he should not be angry with the rest for falling in; nor because they are not yet out, as he is. He did not pull himself out: instead, therefore, of reproaching them, he should show them pity… A man, truly illuminated, will no more despise others than Bartimeus, after his own eyes were opened, would take a stick, and beat every blind man he met.”

Each year at the Bethlehem Conference for Pastors, John Piper gives a biographical sketch of one of his theological heroes. It is always a highlight of the conference, delivered with passion and designed to stimulate the people of God to a deeper understanding and appreciation of grace. At the 2001 Conference, Piper lectured on “John Newton: the Tough Roots of his Habitual Tenderness,” and we commend the message to you.

The Hidden Smile of God by John Piper
Piper is publishing a series of books containing the biographical sketches given as lectures over the years at the Bethlehem Conference. The first volume, which we also recommend to you, published last year was The Legacy of Sovereign Joy: God’s Triumphant Grace in the Lives of Augustine, Luther, and Calvin. The second volume is: The Hidden Smile of God: The Fruit of Affliction in the Lives of John Bunyan, William Cowper, and David Brainerd.

“The afflictions of John Bunyan gave us The Pilgrim’s Progress,” Piper writes. “The afflictions of William Cowper gave us ‘There is a Fountain Filled with Blood’ and ‘God Moves in a Mysterious Way.’ And the afflictions of David Brainerd gave us a published Diary that has mobilized more missionaries than any other similar work. The furnace of suffering brought forth the gold of guidance and inspiration for living the Christian life, worshiping the Christian God, and spreading the Christian gospel.” The story of the three are worth reading, the three stories in one volume speaks eloquently of how God uses suffering in the lives of his people, and Piper’s love for these heroes of faith is contagious.

John Newton and the English Evangelical Tradition by Hindmarsh
Strictly speaking, this interesting study is not a biography of John Newton, at least if we think of a biography as a simple chronological telling of a life story, with only minor and occasional editorial comment by the biographer. Newton’s story is told in John Newton and the English Evangelical Tradition, but within a detailed and enjoyable scholarly study which reflects on his life and ministry in light of the wider context of the evangelical movement in England. (The author, D. Bruce Hindmarsh, is the James M. Houston Associate Professor of Spiritual Theology at Regent College in Vancouver.)

“John Newton (1725-1807),” Hindmarsh writes, “came to maturity during the period which followed the remarkable conversions and field-preaching of the late 1730s and early 1740s, events which signaled the beginning of the Evangelical Revival. By the 1790s, important changes were coming over the religious and political world, and Newton, though revered within his circle, was an old man whose influence was giving way to a younger generation of evangelical leaders. Between these two periods—for which the conversions of John Wesley in 1738 and William Wilberforce in 1785 may stand as symbols—lies approximately half a century during which John Newton’s religious convictions were formed and expressed. During these years Newton also emerged as a significant figure with a wide public within the evangelical movement.”

Newton’s story is remarkable for several reasons. It is a story of grace, amazing grace, as a man who cares not at all for God is graciously rescued and called into ministry. It is a story of tender patience as Newton cares for hurting people, like the poet William Cowper during dark periods of depression that seemed to be unrelenting and unending. It is a story of a pastor who gave himself to his people seemingly without reservation. It is the story of a poet who wrote hymns still loved today, and who found creative ways to speak the truth into the culture of his day. And it is the story of a man who avoided controversy without avoiding controversial people, winning many to the truth of the gospel through the warmth of his compassion and kindness. He wasn’t perfect, of course, but in him was evidence of grace that was undeserved, winsome, and admirable.

Solzhenitsyn: A Soul in Exile by Pearce
This is not the first biography of Alexander Solzhenitsyn, but it is the one I recommend for several reasons. First, its modest length makes it more accessible than previous biographies. Michael Scammell’s Solzhenitsyn: A Biography (1984) weighs in at 993 pages and D. M. Thomas’ Alexander Solzhenitsyn: A Century in his Life (1998) at 537 pages. Joseph Pearce’s offering, Solzhenitsyn: A Soul in Exile, is 314 pages. Second, Scammell depends too much on materials from Solzhenitsyn’s first wife, an important though bitter source. Thomas weaves rather Freudian interpretations into his narrative, marring the work with commentary which is often less than fully convincing. Though Pearce suggests a greater parallel than I think actually exists between Solzhenitsyn’s thinking and that of E. F. Schumacher, it is a minor theme. Third, as an appendix to the book, Pearce includes nine previously unpublished prose poems by the Russian author.

Most important, of the three biographers only Pearce takes Solzhenitsyn’s Christian faith with the seriousness it deserves. “Joseph Pearce is best on what matters most about Solzhenitsyn: the centrality of the author’s Christian faith,” Edward Ericson of Calvin College says. “It is no wonder that Solzhenitsyn chose to…provide him with fresh information. Newcomers to Solzhenitsyn should start with this biography. They will find a highly readable rendition of one of the most sensational lives of the twentieth century.”

Calvin: A Biography by Cottret
“I acknowledge myself,” John Calvin said, “to be timid, soft, and cowardly by nature.” Not the picture most people have of the great Reformer of Geneva, but then perhaps most people know less about the man and his theology than they imagine. Published in both French and German before a translation made Calvin: A Biography available to English readers, the book was written as a corrective. The author, Bernard Cottret, a professor of history at Versaille-Saint-Quentin University in France, was concerned that so much “bigotry” (his term) concerning Calvin was found among his fellow Christians. “The aim of my book,” Cottret says, is “simply to recover the truth, or rather to reclaim the intelligibility of a man in his time.” A scholarly work, Calvin requires a thoughtful reading, but is worth the effort for those interested in the man, his theology, his times, and his continuing influence.