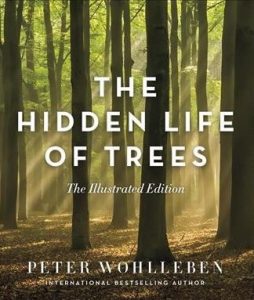 Trees are not just things
When the ancient trees spoke wisely and moved slowly, heroically in J. R. R. Tolkien’s The Lord of the Rings I found it entirely plausible. My own love for trees goes back to the spruce in our backyard under which I found a hiding place as a child, a place safe from criticism, a shelter of solitude where my imagination could soar. Trees aren’t just disposable things—they are creatures of God alive in the purpose for which he made them. Holy Scripture provides very little detail about the new earth and heaven that is yet to come, but we are told to expect trees (Revelation 22:2).

Peter Wohlleben, a forester who manages a woodland in Germany, also loves trees, and after years of caring for them and studying them tells us what he has discovered in The Hidden Life of Trees. What he says may surprise you—the latest studies of trees, he tells us, indicate that trees communicate with one another, feel things and live in intentional community.

I appreciate and share Wohlleben’s passion for trees and forests, their secrets, beauty, and potential—the earth is the Lord’s. I also appreciate the way Wohlleben invites us to be better observers. I encourage you to look around where you live. What dramas are being played out in wooded areas you can explore? How are commerce and survival balanced in the forests and woodlands you know? This book is a lens to help you take a closer look at what you might have taken for granted. Slow down, breathe deep, and look around. What can you hear? What do you see? How do you feel? [p. x-xi] And I appreciate all that Wohlleben teaches us from the latest forestry research.

According to the dictionary definition, language is what people use when we talk to each other. Looked at this way, we are the only beings who can use language, because the concept is limited to our species. But wouldn’t it be interesting to know whether trees can also talk to each other? But how? They definitely don’t produce sounds, so there’s nothing we can hear. Branches creak as they rub against one another and leaves rustle, but these sounds are caused by the wind and the tree has no control over them. Trees, it turns out, have a completely different way of communicating: they use scent…

For example, four decades ago, scientists noticed something on the African savannah. The giraffes there were feeding on umbrella thorn acacias, and the trees didn’t like this one bit. It took the acacias mere minutes to start pumping toxic substances into their leaves to rid themselves of the large herbivores. The giraffes got the message and moved on to other trees in the vicinity. But did they move on to trees close by? No, for the time being, they walked right by a few trees and resumed their meal only when they had moved about 100 yards away.

The reason for this behavior is astonishing. The acacia trees that were being eaten gave off a warning gas (specifically, ethylene) that signaled to neighboring trees of the same species that a crisis was at hand. Right away, all the forewarned trees also pumped toxins into their leaves to prepare themselves. The giraffes were wise to this game and therefore moved farther away to a part of the savannah where they could find trees that were oblivious to what was going on. Or else they moved upwind. For the scent messages are carried to nearby trees on the breeze, and if the animals walked upwind, they could find acacias close by that had no idea the giraffes were there. [p. 6-7]

As a Christian I also appreciate how The Hidden Life of Trees reveals the sad leveling of creation that comes from the presuppositions of naturalism. I do not agree, and believe the Christian perspective to be richer and more realistic, even though Christians have, by and large sadly failed to take it seriously enough to consistently demonstrate a proper care of God’s creation.

The Hidden Life of Trees: What They Feel, How They Communicate by Peter Wohlleben, translated by Jane Billinghurst (Berkeley, CA: Greystone Books; 2015) 245 pages + notes + index.