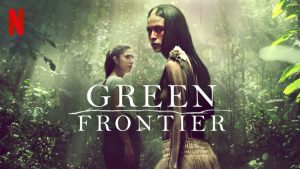 Although perspectives shaped by the Enlightenment—within or without the church—will have barely noticed, the world is rife with mystery, principalities, mystical voices, powers, and spiritual realities.

For one thing, as the ancient Hebrew poet saw so clearly, creation simply will not remain silent. It speaks and sings and tells stories.

The heavens declare the glory of God,
and the firmament shows his handiwork.
One day tells its tale to another,
and one night imparts knowledge to another.
Although they have no words or language,
and their voices are not heard.
Their sound has gone out into all lands,
and their message to the ends of the earth.

Living in such a universe makes spiritual realities present, unless we have trained our ears not to listen. Do we hear it?

Not only does creation speak of divinity, but we live moment by moment at the interface between the physical and spiritual realms, between the visible and invisible, between the natural and the supernatural, between the mythical and the logical. Nearby angelic hosts and demonic hordes, beings of unspeakable majesty or horror exist and actively shed light or cast shadow into human history. It takes a certain kind of blindness not to notice an enemy constantly prowling the world seeking souls to devour. Do we see reality clearly?

Often it is artists, mystics and the mentally troubled that hear and see the supernatural with greatest clarity, but such voices are easily explained away as illusionary, delusionary, imaginary or the meaningless firing of some network in the brain. The confidence that causes us to refuse to listen to these voices is more akin to arrogance than it is to wisdom. Absent metaphor the facts are often unintelligible.

With this in mind, I want to call attention to three cinematic stories—television series, actually—that explore aspects of spiritual reality in a broken world. They will not be to everyone’s taste, but that is not my concern—getting them is more important than liking them. Watching all three must be a right-brain, not a left-brain cinematic encounter. We need to understand why these expressions of myth and spirituality are attractive. What we as Christians can learn from them. And how we can witness to the Story of our Lord in a way that might be intriguing enough for the conversation to continue.

A crime thriller set deep in the isolated and lush Amazonian forest, The Green Frontier introduces us to the supernatural rituals and beliefs of Columbian indigenous peoples.

Some missionaries have been murdered in the jungle on the border of Columbia and Brazil. Detective Helena Poveda (played by Juana del Rio) is sent from the capital, Bogota to investigate. As she does, Poveda uncovers strange new ways of seeing and living that upends her perception of reality and ultimately helps her understand her past. Members of an indigenous tribe in the area who have long resisted contact with the outside world assist her, even as they guard a mystical secret passed on from generation to generation, rooted in ancient shamanistic magic. To them the jungle is not simply their home or an ecosystem; it is a being with which they maintain a fragile, unique and powerful communion.

Ragnarok is a Norwegian fantasy drama in which high schooler Magne Seiera (played by David Stakston) slowly discovers, to his surprise, that he is Thor, the Norse god. The story unfolds in a remote fictional Norwegian town dominated by an industrial complex illegally and disastrously polluting the surrounding air, water and land. The wealthy family members that own the business are all actually Jötunn, in human form, which in Norse mythology are frost giants. They have the town under their control, and Magne’s initial, bumbling attempts to intervene backfire spectacularly.

Though I found the series too slow in its pacing and too weirdly brutal in depicting the evil of the villains, there is no doubt the old Norse myths can continue to capture imaginations. Ragnarok represents a creative attempt to apply them to a modern setting.

“The show is the brainchild of married team Michelle and Robert King. Here they directly explore the question: What is the nature of evil? The outcome is a provocative series that studies through narrative drama the intersection of science and religion.
“The story centers on an open-minded but skeptical lapsed Catholic psychologist Kristen Bouchard who begins working with Roman Catholic priest-in-training David Acosta and blue-collar non-practicing Muslim technology contractor Ben Shakir. The Kings fall on both sides of the debate—Robert believes in the demonic, while Michelle doesn’t. What emerges is an honest and balanced debate about the nature of reality. Neither sees reality in black and white categories, making them exemplars of what I have described in my book The New Copernicans as an ‘open immanent’ perspective. Robert states, ‘I think it works as both metaphor and fact. Exorcists we’ve talked to talked about how difficult it is to distinguish between mental illness and what they would call demonic possession. Because demonic possession can be mixed in with mental illness, and the reverse is true too.’ Michelle adds, ‘Given that we created two characters that have very different ideas, it is important to me that they listened to each other respectfully, and that they feel comfortable expressing those opposing viewpoints. It feels like there’s not a lot of listening going on in the world.’”