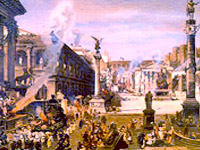 When my copy of The Greco-Roman World arrived, I scanned the table of contents and the first page, as I always do with new books. Usually it then goes in the ever growing to-be-read pile in my office. In this case, however, I sat down and began to read. This is a very good book.

It is well written enough to be read for enjoyment, and carefully organized and indexed so as to be a useful resource, The Greco-Roman World is a superb introduction to first century life and culture. Dr. Jeffers, who teaches ancient history at California State University, brings a wealth of historical research to shed light on the names, places, events, and times that we read about in the Scriptures. “If the New Testament texts were written to make sense to people in the first century,” Jeffers writes, “then we must try to put ourselves into their places in order to determine what the writers of the New Testament intended their readers to understand by what they wrote.”

Perhaps not since the first century have the people of God lived in such a pluralistic setting religiously and culturally as we do today. The Greco-Roman World can help us better understand the culture of the New Testament, so that we can be more faithful in our own.