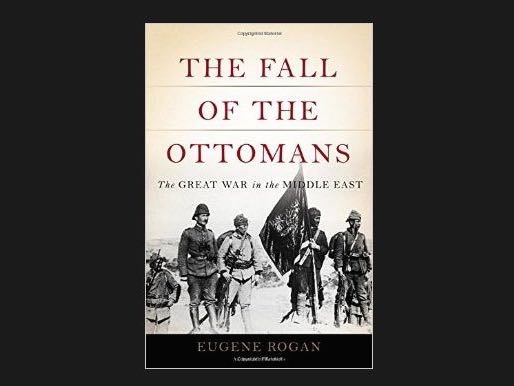 When National Self-interest Begets Trouble
The First World War has always seemed like a distant reality to me—a horrible conflict that engulfed other people living in other places a long time ago. The history I learned told of awful trench warfare, and wholesale slaughter of troops trying to gain a few yards of territory. By the time it ended something like 16 million people had died. What I did not realize is how World War I shaped the Middle East in ways that continue to send out ripples of mistrust, unrest, and violence that explode in today’s headlines. WWI is not a distant reality after all.

A book—The Fall of the Ottomans by Eugene Rogan—has changed my understanding of the Great War and its sorry aftermath. Rogan is a Oxford historian and the author of The Arabs (which I also recommend). In The Fall of the Ottomans he tells the story of WWI from the perspective not of Europe but of the Middle East. In that part of the world, rather than the grinding trench warfare of the European front, the battles that raged were often fluid and dynamic, and surprisingly tenacious.

It is difficult for Westerners to grasp the significance of the Ottoman Empire today. It was a major player in WWI, an ally of Germany and Austria/Hungary against the Allies (Britain, France and Russia). Between 1453 and the end of WWI in 1918, the Ottomans ruled an empire that at its height stretched from present day Hungary and Bulgaria across into Russia, all of Turkey through the Caucasus, down through Palestine and Syria, through Arabia and Egypt and across North Africa. It was rich and powerful enough to rival the great European kingdoms and empires and was ruled by a sultan/caliph who was considered the rightful ruler of the Muslim world. It is a heritage the Islamic world remembers with pride and its dismemberment by the Allies has remained not merely a great loss in the hearts and imaginations of Middle Eastern Muslims but a painful humiliation.

Westerners today assume that diplomats and politicians will pursue policies that serve their national self-interest. So, during the course of WWI, the Allies secretly negotiated treaties with one another that would allow them as victors to carve up the Ottoman Empire in ways that would best serve their imperial interests. “Had the European powers,” Rogan writes, “been concerned with establishing a stable Middle East, one can’t help but think they would have gone about drafting the boundaries [of nations] in a very different way.” Instead, he says, they made “outlandish agreements, which were only conceivable in wartime.” (p. 404)

As WWI escalated in the years following 1914, the Allies feared that the call to jihad by the Ottoman Sultan would cause Muslims to rebel in their colonies, forming a fifth column at home. That never materialized but the distrust it engendered poisoned relations that have never fully healed and the fear led to battle plans that in hindsight proved to be unwise. “Much of the Allied war effort in the Middle East,” Rogan says, “was driven by what proved to be an unwarranted fear of jihad.” (p. 404) This failure to comprehend their enemy lengthened a very costly and bloody conflict.

Foreign policy that is shaped by a doctrine of national self-interest can have unintended consequences. Just because WWI seems like a distant reality to me, it is not to everyone. For, as Rogan concludes, “in the Middle Eat more than in any other part of the world, the legacies of the Great War continue to be felt down to the present day.” (p. 406)

Reading The Fall of the Ottomans has helped me better understand my world.