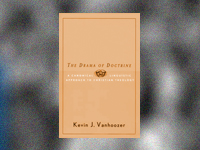 Common sense and cannon sense
I suspect everyone knows what common sense is, though not everyone exhibits it. It’s that almost inexplicable practical wisdom that some people have for choosing rightly and living rightly, even in novel situations. It can’t be taught in a workshop, though workshop leaders that exhibit it tend to be better teachers. It can’t be summarized in a book, though authors who have it tend to write better books. Proverbs embody bits of it. Probe into the lives of people who demonstrate common sense and you’ll probably find three common elements. An attractive mentor of some sort who was characterized by common sense, a view of the world in which practical wisdom for living well is valued highly, and experience in living where there was safety to fail, learn, and keep on keeping on.

Wheaton College theologian Kevin Vanhoozer proposes that Christian faithfulness includes what he calls canon sense. It’s practical biblical wisdom for choosing and living faithfully in a fallen world, demonstrating grace even in novel situations. Like common sense, it is learned in living, with a mentor who sees and lives life in deeply biblical categories and for whom faithfulness is a way of life. Canon sense is what attracted me to Francis Schaeffer in the Sixties.

Canon sense, Vanhoozer says, allows us to live within the unfolding biblical story. Where the Story of Creation, Fall, Redemption and Restoration shapes our perception of life and forms us into a character fit for dwelling in that story. Like actors who “get into” a part so deeply they can improvise when something unexpected suddenly happens on stage, we can know and live in our script, the canon of Holy Scripture, so deeply that we will be able to instinctively improvise a scene the script does not specifically address. This is not going beyond the script but rather dwelling more deeply in it.

What drew me to Schaeffer was not perfection, but his canon sense. His willingness to not just profess that Christ is Lord of all, but to actually live as if it were true. To not just preach the gospel, but to seek to demonstrate that it has something substantial to say about every part of life. Since people are made in God’s image, unhurried conversation, listening, and asking questions were essential to faithfulness. There was no reason to be defensive or withdrawn because although we do not have all the answers, God has spoken in a way we can understand. This was new, and attractive because I sensed that canon sense is rooted in the grace that promotes human flourishing.