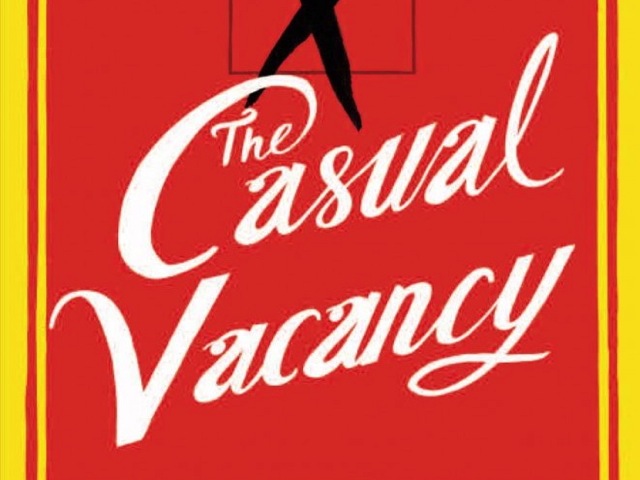 Behind drawn curtains in the shadow of ruins
There is a “casual vacancy” in Pagford. That’s what they call it when a member of the Parish Council—what in America would be termed the Town Council—dies unexpectedly so a post is suddenly vacant. In the greater scheme of things that would not seem to be the stuff of a novel, except for the loss and grief that has descended on Barry Fairchild’s wife and children. But J. K. Rowling is not content to allow us to see only the surface of life in this small and picturesque English village, but relentlessly burrows into the substance of lives and relationships to uncover the petty resentments, ordinary stresses, occasional illnesses, unspoken prejudices, fractured families and shattered hopes that ferment in the brokenness that is normally kept carefully out of sight. Rowling is not being unkind to the Pagford’s of the world, nor has she set up a mythical town for the setting of dark dealings and nasty secrets that could only be imagined in a piece of fiction. If we do not recognize ourselves as Pagfordians, regardless of where we live, we are not living in reality but in a world of our own imagining.

The Casual Vacancy is a book that does not lie about the human condition. Rather, it sympathetically but relentlessly exposes it. What is extraordinary is that no one is tattled on in this story—each individual is allowed to tell their own story, in their own words. Each is allowed their own point of view, and each is convinced they understand their neighbor’s point of view and what is best for the common good. These are normal people, living ordinary lives—normal, ordinary, and broken.

The village of Pagford lies in a valley through which a river winds. At its edge is “The Fields,” a government sponsored housing development that is feared and disliked because in its alleyways are addicts, dealers, unwed mothers, and too many people without jobs. The people of Pagford work for a living, and those that run shops and businesses tend not to hire applicants from The Fields, and if they do it is for less than a living wage. Overlooking the town, like a silent observer that acts as a sentinel for something that has been lost, perhaps irretrievably, is the ruins of a great abbey.

We meet Howard and Shirley Millison, first citizens of Pagford who lead the effort on the Parish Council to cut funds for The Fields and close it’s free clinic/drug treatment center. Barry Fairbrother, born and raised in The Fields, having escaped it into middleclass existence, leads the opposition. His wife, Mary, is proud of Barry and much in love with him and their children, but secretly resents how much time The Fields takes him away from the family. We meet Parminder Jawanda, the general practitioner in Pagford, whose husband Vikram is a cardiologist. They are Sikhs, which causes them to stand out from the rest of the population. Vikram, seldom at home, concentrates his attention and affection on his two sons, both good students. Parminder is also on the Council, whose support of The Fields seems to be primarily support for Barry who has overcome such odds in his life. Parminder cannot understand why her younger daughter Sukhvinder isn’t more like her beautiful older sister who is not only a good student but confident and outgoing. We meet Krystal Weedon, who lives in The Fields, the older daughter of Tessa, a heroin addict and occasional prostitute, who struggles to care for Robbie, her 3 year old brother and keep the family intact. There is Kay, a social worker, and Miles Mollison, son of Howard and Shirley who becomes a candidate to replace Barry on the Council, and Stuart “Fats” Wall, whose unkind, relentless bullying drives Sukhvinder to the edge of despair. And there are more, characters like me, and you, and like our neighbors, for blessing and for curse. Rowling is a good enough writer to keep all these characters distinct as we read, and though they are all distinct from one another, I felt each was to some extent like me, or like someone I know.

Rowling is careful to let each person have their say, and as the story unfolds we see Pagford, and life, through each character’s eyes. In doing so The Casual Vacancy becomes a parable for life in the West at the beginning of the 21st century. The challenge of religious and cultural pluralism, the pressure of limited financial resources, the debate over the role of government, citizens who are certain they understand the other side but whose lifestyle insulates them from ever having to actually talk and listen to those with whom they disagree, and the thin layer of legality that maintains appearances while an ugly lack of civility poisons the community—all this is the wider cultural setting for Rowling’s novel.

The Casual Vacancy is not great literature, but it is a very good novel and better than much of the fiction that competes for readers in the marketplace. It tells the truth about life and reality, and reflects, sadly and accurately the sort of pain and fragmentation that haunts our world and lies as hidden as is possible behind the drawn shades of the flats and houses that line the streets of the cities and towns where we live.
Rowling does not provide an easy narrative with a hero and a villain, a simple conflict, a satisfying resolution, and a lovely sunset on the final page. The Casual Vacancy is peopled with ordinary folk, broken and yearning for hope in a world lying in the shadow of a ancient, rich tradition of moral wisdom and redemptive grace that is now in ruins, unappreciated and deemed irrelevant.