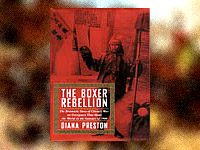 In 1900, The Boxer Rebellion rippled like a violent earthquake through China. For years there had been simmering discontent over the flood of Westerners who had arrived with their technology, Christianity, and culture. Western powers forced concessions from the Empress, and their innovations brought massive changes to a way of life that was rooted in traditions that stretched back over hundreds of years. Then, a violent, mystical movement began in the countryside, and swept across China, terrorizing the foreigners. No one imagined that these Boxers—as they were called, contemptuously by the Westerners—would so quickly become a movement which would require a multi-national military force to suppress.

In The Boxer Rebellion, Oxford-trained historian Diana Preston tells this story which is of interest for two reasons: because so many missionaries were martyred during the uprising, and because this was the first multi-national peace-keeping force in which America took part. The book reads like a novel, and eerily parallels the daily news.