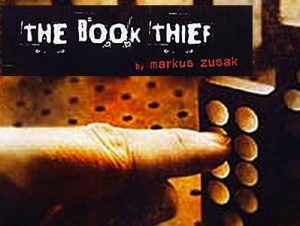 In 2005 Markus Zusak published The Book Thief, a novel about a young orphan in Nazi Germany living in a small town near Dachau.

It is a remarkable book, one reason being that it joins so many others set during the time of the Holocaust without simply being a repetition of the horrible story we have heard before. Not that the story must not be repeated—our memories are short and appropriate repetition is something wise people cherish. Still, The Book Thief is a fresh story, with its own surprises and insights, with characters I grew to love as the plot unfolded. Another reason The Book Thief is remarkable is for the quality of the prose. Zusak is masterful crafting words and images in the telling of his story, so that settings seemed vivid, characters seemed deeply human, and events were plausible. I found myself rereading sections simply for the prose. And third, The Book Thief is remarkable for its narrator, which is Death itself. I must confess that when I first heard this fact about the novel, I was dubious. Could an author sustain such a voice? But Zusak does sustain it, to great effect. Following the tenuous yet precious life of Liesel Meminger develop within a society that murders relentlessly as Allied bombing runs send them scurrying into basements for shelter, it seemed right that it be Death’s perspective we adopt. After all, the reality of death is one thing all human beings share in common, regardless of their lot in life.

The Book Thief is a tiny slice of life, following the life of a young adolescent woman during a period of upheaval and loss, brutality and friendship. It helps us see that even in the midst of intense societal decay human beings remain human, yearning for meaning and dignity and the hope of a love that will not abandon them. Some reviewers have dismissed The Book Thief as sentimental, but I have trouble seeing that. As a novel marketed for a young adult audience there is a stark reality in the story, of real people going through times that stretch them to make choices no person should have to make. There is a proper messiness in that even while children continue to play amongst the rubble, unable and unwilling to give in to the horror that stalks just outside the edges of their consciousness.

As of this writing (March 2012), The Book Thief has been on The New York Times Children’s Best Seller Book List (rated for ages 14 and up) for 240 weeks. It’s worth reading and discussing—both with the young people in our lives and with one another. It turns out that listening to Death tell a story is a bracing, life-affirming experience.

Death’s Diary: The Parisians
Summer came.
For the book thief, everything was going nicely.
For me, the sky was the color of Jews.
When their bodies had finished scouring for gaps in the door, their souls rose up. When their fingernails had scratched at the wood and in some cases were nailed into it by the sheer force of desperation, their spirits came toward me, into my arms, and we climbed out of those shower facilities, onto the roof and up, into eternity’s certain breadth. They just kept feeding me. Minute after minute. Shower after shower.

I’ll never forget the day in Auschwitz, the first time in Mauthausen. At that second place, as time wore on, I also picked them up from the bottom of the great cliff, when their escapes fell awfully awry. There were broken bodies and dead, sweet hearts. Still, it was better than the gas. Some of them I caught when they were only halfway down. Saved you, I’d think, holding their souls in midair as the rest of their being—their physical shells—plummeted to the earth. All of them were light, like the cases of empty walnuts. Smoky sky in those places. The smell like a stove, but still so cold.

I shiver when I remember—as I try to de-realize it.
I blow warm air into my hands, to heat them up.
But it’s hard to keep them warm when the souls still shiver.
God.
I always say that name when I think of it.
God.
Twice, I speak it.

I say His name in a futile attempt to understand. “But it’s not your job to understand” That’s me who answers. God never says anything. You think you’re the only one he never answers? “Your job is to…” And I stop listening to me, because to put it bluntly I tire me. When I start thinking like that, I become so exhausted, and I don’t have the luxury of indulging fatigue. I’m compelled to continue on, because although it’s not true for every person on earth, it’s true for the vast majority—that death waits for no man—and if he does, he doesn’t usually wait very long.

On June 23, 1942, there was a group of French Jews in a German prison, on Polish soil. The first person I took was close to the door, his mind racing, then reduced to pacing, then slowing down, slowing down….

Please believe me when I tell you that I picked up each soul that day as if it were newly born. I even kissed a few weary, poisoned cheeks. I listened to their last, gasping cries. Their vanishing words. I watched their love visions and freed them from their fear.

I took them all away, and if ever there was a time I needed distraction, this was it. In complete desolation, I looked at the world above. I watched the sky as it turned from silver to gray to the color of rain. Even the clouds were trying to get away.

Sometimes I imagine how everything looked above those clouds, knowing without question that the sun was blond, and the endless atmosphere was a giant blue eye.

They were French, they were Jews, and they were you.