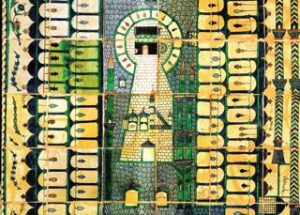 A world we should know
I suspect I do not need to list reasons that it might be wise to include this book (or another on the same topic) on your reading list. The reasons are evident in the headlines of each day’s news.

The Arabs is accessible for the general reader, covering five centuries of Arab history from the Ottoman Empire to the present historical moment. It is a work of serious history by a serious scholar, but the goal is not a recital of events, names, and places but the telling of a story in which events unfold as real people in real places sought to live life in a part of the world where those who desired power, political influence, and international prestige always left their mark. The Arab world is a place where armies have often marched, where empires have risen and fallen, and where a history rich in art, culture, and extremes of wealth and poverty have produced people who are proud of their legacy and willing to fight to preserve their dignity.

Bound by a common identity grounded in language and history, the Arabs are all the more fascinating for their diversity. They are one people and many peoples at the same time. As the traveler moves across North Africa from Morocco to Egypt, the dialect, calligraphy, landscape, architecture, and cuisine—as well as the form of government and types of economic activity—transform in a constantly changing kaleidoscope. If the traveler continues through the Sinai Peninsula into the Fertile Crescent, similar differences arise between Palestine and Jordan, Syria and Lebanon, and Iraq. Moving south from Iraq to the Gulf States, the Arab world shows influences of nearby Iran. In Oman and Yemen, the influences of East Africa and South Asia are apparent. All of these people have their own, distinct history, but they all see themselves bound by a common Arab history.

This wildly diverse story is the one Eugene Rogan, professor at St Anthony’s College, Oxford, tells in The Arabs. It is a story many of us do not know very well, though our representatives makes crucial decisions about this part of the world on an almost daily basis. As I write this, the blood of American soldiers is being absorbed into the soil of one country, Iraq that is in the very heart of the Arab world. Those who ruled in Baghdad once ruled a sprawling empire that stretched into Europe and controlled trade that poured such wealth into the Caliph’s coffers that the European ambassadors who came calling were intimidated by what they saw.

This is a story, a history we need to know, and in The Arabs the prose makes reading it a delight. We recommend it to you.