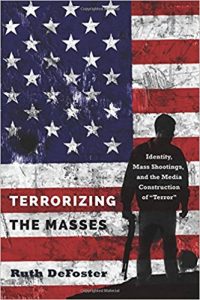 Shaped by media in an age of toxic masculinity
A question: how often do mass shootings occur in America? Well, it depends on how you define the term. Let’s define it in a restrictive way, as excluding other crimes such as robbery, as occurring in a public or open place, and as involving the deaths of at least four victims. With this definition the number of mass shootings in America averages between 2 and 20 each year.

But if we define mass shootings simply as any shooting that takes the life of at least four victims, the number increases dramatically. “June 12, 2016. A gunman opens fire in an Orlando nightclub, leaving 49 dead and many wounded. It was the deadliest mass shooting in modern U.S. history—until… October 1, 2017. A gunman opens fire on a country music festival in Las Vegas. At least 59 were killed and 527 were injured. Since Orlando, at least 585 people have been killed and 2,156 have been injured in mass shootings.” There is 477 days between those two dates, The New York Times notes, and in that period there were 521 mass shootings.

It’s all very horrifying regardless of how we define the term. Yet it is also a bit confusing because how we define the term matters. Should a bungled store robbery in which four innocent bystanders are tragically killed be identified as a mass shooting if the robbers opened fire in an attempt to elude capture? Is that the same sort of crime that occurred in the Orlando nightclub and the Las Vegas concert? Does it require the same response?

Even one mass shooting is a tragedy, a deep grief that should rock our souls. Families have lost loved ones, lives have been shattered by death or by being maimed, people feel less secure than they did the day before and perhaps view others with greater mistrust and suspicion. How we define these things changes how we see them and how we as individuals and as a nation respond to them.

But the situation is more complicated still. Not only can the term mass shooting be used differently in different reports about different incidents, the term terrorism is even more difficult to define. Is the store robbery an act of terrorism if the perpetrator is Muslim? What if a terrorist organization claims responsibility even though there are no known links or contacts between the shooter and the organization? What if the perpetrator states their purpose is to instigate a holy war even though they are not Muslim?

In Terrorizing the Masses, communications scholar Ruth DeFoster concludes that how the media reports these incidents is less than helpful if the goal is to help us understand what’s actually going on in the world.

Confronted with mass shootings in a post-Columbine, post-September 11 world, journalists and commentators tend to shunt shooters into one of two neatly delineated camps—“crazy” or “political.” And in coverage of mass shootings with any hint of a link to Islam, Arab or Muslim identity, or any interest by the shooter in Islamic extremism, the two categories shift to “crazy” (or “disturbed”/“unbalanced”) or “terrorist.”

The designation of terror in media coverage is not rooted in policy, nor is it rooted in scholarship. Rather, this designation is prompted primarily, even solely, by the racial and religious identity of the perpetrator, and informed by the cultural iconography of September 11. Joseph Stack, who penned a political manifesto and flew a plane into a building, was not identified as a terrorist. Wade Michael Page, a white supremacist who opened fire on a Sikh temple in Wisconsin in 20l2, was not identified as a terrorist, despite the fact that his ostensible aim in the attack was to spur a “racial holy war.” Scott Michael Greene, who is charged with ambushing and killing two police officers in Iowa in November 2016, was not identified as a terrorist. The Fort Lauderdale airport shooting in January 2017, committed by a mentally ill military veteran who believed the U.S. government forced him to watch ISIL recruitment videos, was not framed as an act of terror. Neither was the white nationalist, Alexandre Bissonnette, who opened fire on a Quebec City mosque in January 2017, although some broadcast media identified him as a “lone wolf.”

But shootings and bombings with Muslim culprits—whether they are mentally ill or not—are always framed as acts of capital-T Terror. The Tsarnaev brothers in Boston. Syed Farook and Tashfeen Malik in San Bernardino. Nidal Hasan at Fort Hood. And Omar Mateen in Orlando.

Consequently, a concise definition of what qualifies an act as “terrorism” in broadcast news is as follows: A violent criminal act, committed by a Muslim culprit (or culprits), that targets civilians with the intent to intimidate, coerce or otherwise terrorize a broader population, whether or not the culprit is a member of any larger organized group, and irrespective of the mental health of the culprit(s). [p. 197-198]

In the Christian view of things, at the beginning our first parents were called of God to name the animals (Genesis 2:18-20). That part of the creation narrative not only inspired Bob Dylan to write a playful song, it is also a mythic clue as to the significance of naming. What we call things matters, and matters even more in a fallen world where we see only dimly and in part. On the one hand, the process of observing, identifying, discriminating, and describing created reality is the essence of science, and Adam and Eve’s task hints at the glory that would follow as history unfolded. And on the other hand, the name we assign to things changes how we see them and react to them. Imagine this: an unknown male in a hoodie walks past my house four times in the course of an hour. Will I not look out my window differently if I am asked about the street thug casing the neighborhood vs. a man getting some exercise on a chilly autumn day?

How we identify—and how the media identifies mass shootings and acts of terrorism are of real importance. It can affect how safe we feel, how we vote, how we pray, how we see and act towards our neighbors, and the policies we support on so many issues from immigration to policing to justice to gun control to international relations to religious freedom. All of this is something Christians must think about well if we are to help heal the divisions tearing apart the frail fabric of American democracy.

The author of Terrorizing the Masses is a dear friend whom I have known since she was a little girl. If that makes me sound old, it’s because I am old. I take no credit in Ruth DeFoster’s pilgrimage, though if I could it would be an honor. Her calling is in journalism, her vocation is teaching, and her passion is truth and justice. Terrorizing the Masses, based on her doctoral research is her first book but hopefully it will not be her last.

Terrorizing the Masses is not easy or comfortable reading. Much of it details the results of her research into how the media has reported on mass shootings. Rather than have us take her word for the conclusions she draws, DeFoster walks us through the data to her conclusions, so the book will seem a bit dense for some readers who simply want the conclusions handed to them.

Terrorizing the Masses is also not easy or comfortable because some of what DeFoster concludes from her research is unsettling. “Mass shootings are performances,” she shows, “almost always meticulously planned in advance, with an eye towards achieving posthumous infamy” [p. 200]. Almost always perpetuated by males, they represent a horrifying attempt to prove one’s manhood in a world where a misguided masculinity meets a freewheeling gun culture.

Examining the history of mass shootings in the United States, three factors are predominant in nearly every case: (1) severe, preexisting, untreated mental illness, (2) easy (usually legal) access to high-powered weaponry, despite the fact that the majority of mass shooters suffer from the type of mental illness and/or drug abuse that should have prevented them from accessing firearms. And finally, (3) the powerful influence that an immersive environment of toxic masculinity, informed and inflected by the cultural iconography that accompanies large scale violence, plays in creating a context in which men choose to become mass shooters.

In the case of each of these severely disturbed men (and indeed, there’s a chicken-and-egg definitional problem inherent in any mass shooting, as one must be severely disturbed to even seriously contemplate this type of violence) identifying the specific element or factor that ostensibly pushed each man to the “brink” of this violence is irrelevant. Mass shooters do not “snap”—they consistently and predictably move down a path toward these episodes of violence. [p. 201-202]

Many young men today grow up fatherless, either through the fragmentation of divorce or the abandonment of families to crushing busyness from demanding jobs, fitness regimens, lengthy commutes, and the interruptions of cell phones and other devices. Popular culture tends to glorify revenge in the place of justice accomplished by strong men with guns who take on the world and are remembered for their virile masculinity and body count. In a world in which gender can be confused and confusing and where misogyny is dismissed as either comedic or locker room normalcy, the church seems incapable of mentoring young men into adulthood because a robust Christian theology of the body, heroic virtue and spiritual friendship has been long lost.

Terrorizing the Masses is a book length exercise in discernment that seeks out the truth even when that truth is buried in good intentions, popular perspectives and widely accepted practices. DeFoster’s conclusions will not please those who are captive to ideologies of either the right or the left. It will please only those for whom hard truths and sharp clarity beats prejudices and easy answers repeated so often that they soon become unquestioned and unchallenged. Sad to say, I am uncertain how many Christians will be in that number.

So, I hope you will take Terrorizing the Masses seriously even though it is not the sort of book we can read and forget. Knowledge bears its own responsibility. DeFoster’s book requires people of good will to think more deeply, to consume media news with more intelligent care, to ask more probing questions, and to be willing to lean against some of the things most of us have heard so often we simply take them for granted.