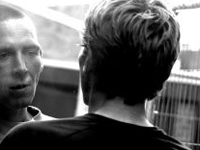 Words can hurt. Having childhood tears dismissed with sarcasm, “real men don’t cry,” proved that to me early in life. Even truthful words can hurt. The writer of the New Testament book of Hebrews uses the metaphor of a sword to describe God’s word (4:12), a “two-edged sword.” The image is one of a needed surgery, not being carved to shreds by the slashing rhetoric of someone wanting to cut us down to size. Still, truth cuts to the heart and that hurts.

Words that are true but inappropriate can hurt, too. “The simple fact of being able to express an opinion,” Henri Nouwen says, “to set up an argument, to defend a position, and to clarify a vision has given me, and gives me still, a sense of control.” A sense of control over the conversation, so it can go where I am most comfortable, so it can remain where I like it, so that I never have to admit I don’t know.

This is one reason I am more apt to talk than to listen. If I talk I can remain in control. If you talk, who knows where we’ll end up? “I like to do all the talking myself,” Oscar Wilde wrote. “It saves time, and prevents arguments.”

What I’m coming to see is that this sort of talking is abusive. Not listening fails to treat you with the dignity that is rightfully yours by being created in God’s image. Insisting on controlling the conversation is really seeking to control you. Listening to you is not passive, it is a way to exhibit humility, to embrace an active dependence on the Spirit of God so that walking by faith is not just my profession but my way of life. Refusing to control the conversation is not passivity but an intentional act of leaving it in God’s hands.

I’m not saying that endless silence is somehow good. That’s not conversation. But knowing when to be silent, to listen, and to be comfortable when periods of silence allow moments of quiet in a frantic world—these are gracious things. Knowing when to be silent means learning to be comfortable when I am not in control, when I don’t know where things are headed, when I might need to say I don’t know. Filling those moments with words is very tempting. It’s a temptation I need to resist.