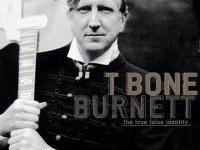 In the fourteen years since his last album, The Criminal Under My Own Hat, T Bone Burnett has been in the background, neither touring nor recording. Instead, he has lent his finely tuned musical gifts to other artists. He produced the superb soundtracks of O Brother, Where Art Thou?, Walk the Line, and Cold Mountain. And he has produced numerous albums for some of the best musicians, including Los Lobos, Bruce Cockburn, Gillian Welsh, Elvis Costello, Tony Bennett, and Counting Crows. He has done exquisite work for which we can be grateful. And now we can be grateful he has released an album of his own, The True False Identity.

“This is a crime record,” T Bone says on the music video on side two of the album, “a criminal record. It is a comedy record. In the theater you can hear laughter and gasps at the same moment. Some people are amused by the same thing other people are appalled by. It is the aim of this record to erase the nonexistent line between comedy and tragedy. So this is a record of tragedy, the tragedy of reality having been devoured by image management.”

The True False Identity is music with a conscience, songs wrung from the soul of an artist who believes too much has been undermined. He wants us to pay attention, and is wise enough to the ways of the world to know that this itself is a tall order. So he crafts songs designed to wake us up: scorching intros, layered percussion, hauntingly beautiful melodies, and thoughtful lyrics that provide a clearer vision of reality. T Bone jars us into reflecting on what’s gone wrong. On how sound-bites replace wisdom, virtual images trump reality, and tribal politics rips apart all sense of the common good. His sharply drawn vision of a media-saturated world conjures up voodoo scenes from a horror film.

One reviewer says this “is no mere comeback album,” but “a powerful, modern epic for the twenty-first century.” Like his fellow believers U2 and Bob Dylan, T Bone Burnett is not willing to let postmodern cynicism flow into apathy. Nor is he willing to be silent when his faith is highjacked by politicos seeking easy legal solutions to the problems of the heart.

If sin were dealt with by the laws of man
Everybody would be in jail for life.
[From “Blinded by the Darkness”]

Critic Thomas Kintner characterizes The True False Identity as “an insistently rhythmic, perspective-rich assortment of roots-rock tunes that brim with equal parts tuneful passion and biting dissatisfaction.” Not quite. There is dissatisfaction, to be sure, but T Bone is not content to stop there, and too mature to have to. With subtle humor, word play, biblical allusions, and lines of poetry that lodge in memory, he insists that what’s wrong with the world goes far deeper than personal dissatisfaction. Something is truly wrong—whether we are dissatisfied or not, and we certainly need to be.

Besides the “wisdom, the acidic humor, the blistering commentary,” Jeffrey Overstreet says, “there’s something more… a weight, a weariness, echoes of violence still resonating in the hollows of a broken heart. T Bone’s lamenting everything he sees here, from the burden of a lost love to the culture of fear cultivated by a devious government, to his own private failures.”

Back in the seventies my spiritual mentor Francis Schaeffer warned that the greatest threat to living well would be the siren call of “personal peace and affluence.” In busyness, proliferating distractions, and the ability to erect walled communities (both real and virtual), we withdraw from the more vulgar demonstrations of the brokenness that haunts reality. Things, and things to do, so much of both that we may have ears but don’t hear, and eyes, but we rarely see. T Bone is a man who intends to issue a wake-up call, who wants to interrupt our cheap comfort, who like the watchman who has remained alert in the darkness can cry out warning. And that, in a noisy world, is a very rich grace. Especially when the wake-up call is crafted with such musical genius.