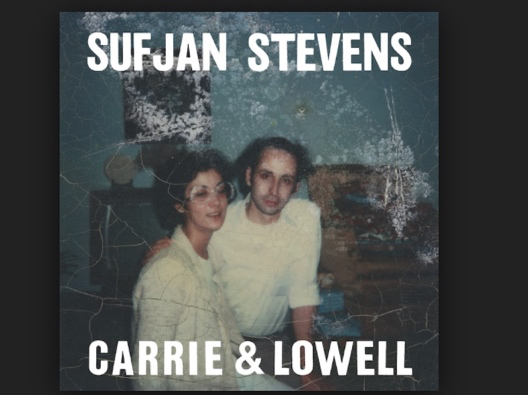 When loss and love in the past linger
For several days after downloading Sufjan Steven’s latest album, Carrie & Lowell, I simply pressed REPEAT and let it play. I was at my desk in my office, and so was focused on my work, writing emails and articles and working on a book manuscript. Outside the windows the oaks and ash trees are slowly leafing out and the cardinals, woodpeckers, finches and chipping sparrows visiting our bird feeders are building nests. The album’s sound is pensive, introspective, full of sweet lament, and a quiet hope that is born in love. Stevens is not producing music for a market as much as opening his heart. I am not qualified to state how this album rates compared to the rest of his music but I can state that this album is a stunning achievement.

I forgive you, mother, I can hear you,
And I long to be near you
But every road leads to an end
[“Death with Dignity”]

Carrie is the name of Steven’s mother, a deeply troubled woman who left the family several times.

Did you get enough love,
my little dove
Why do you cry?
And I’m sorry I left,
but it was for the best
Though it never felt right
[“Fourth of July”]

Carrie died in 2012. Lowell is the name of his stepfather, who was married to Carrie for five years and manages Steven’s label, Asthmatic Kitty Records. “With this record,” Steven’s told Pitchfork.com, “I needed to extract myself out of this environment of make-believe. It’s something that was necessary for me to do in the wake of my mother’s death—to pursue a sense of peace and serenity in spite of suffering. It’s not really trying to say anything new, or prove anything, or innovate. It feels artless, which is a good thing. This is not my art project; this is my life.”

The ancients took lament seriously, and used poetry and music to both express it and to find a way to the other side. The Hebrew psalmists refined the art of lament and Jesus quoted from a psalm of lament when he cried out in agony during his crucifixion. Is it possible we have lost this art, and in the process have also lost something of our souls? Stevens does not invite us to his pity party, but demonstrates what health looks like in an essential part of existence in a fallen world.

I do not know how Sufjan Stevens gained such wisdom, but I am forever in his debt for having shared it with such aesthetic brilliance.