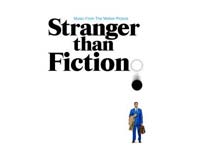 Farrell plays Harold Crick, an IRS agent so regimented that every part of his life is tightly controlled and measured. Then, one day, out of the blue, he hears a voice narrating his life.

Kay Eiffel: [narrating] This is a story about a man named Harold Crick and his wristwatch. Harold Crick was a man of infinite numbers, endless calculations, and remarkably few words. And his wristwatch said even less. Every weekday, for twelve years, Harold would brush each of his thirty-two teeth seventy-six times. Thirty-eight times back and forth, thirty-eight times up and down. Every weekday, for twelve years, Harold would tie his tie in a single Windsor knot instead of the double, thereby saving up to forty-three seconds. His wristwatch thought the single Windsor made his neck look fat, but said nothing.
The situation is, to say the least, disconcerting. So, Crick visits a psychiatrist.

Harold Crick: No, no. It’s not schizophrenia. It’s just a voice in my head. I mean, the voice isn’t telling me to do anything. It’s telling me what I’ve already done… accurately, and with a better vocabulary.

But then a bigger problem arises. Crick doesn’t like what he hears. It’s not just that the mysterious voice is uncannily accurate—it is beginning to discuss his impending death.

Kay Eiffel: [narrating] Little did he know that this simple seemingly innocuous act would result in his imminent death.

Harold Crick: [on a street corner waiting for a bus] What? What? Hey! HELLOOO! What? Why? Why MY death? HELLO? Excuse me? WHEN?

Novelist Karen Eiffel, played by Emma Thompson, is writing a story about a character named Harold Crick. Dustin Hoffman plays a literature professor whom Crick approaches for help in understanding stories, and Maggie Gyllenhaal plays a baker, Ana Pascal, who has not paid all her taxes and so is being audited by Crick.

Ana Pascal: Listen, I’m a big supporter of fixing potholes and erecting swing sets and building shelters. I am more than happy to pay those taxes. I’m just not such a big fan of the percentage that the government uses for national defense, corporate bailouts, and campaign discretionary funds. So, I didn’t pay those taxes. I think I sent a letter to that effect with my return.

Harold Crick: Would it be the letter that begins “Dear Imperialist Swine”?

Ana thinks he’s a creep for working for the IRS but then is appalled to learn no one has ever baked him a cookie. You can guess where things go from there.

The dialogue is witty and as sharply delivered as it was written. The performances are believable without being sentimental, even when falling in love or standing on the edge of meaninglessness and despair. The characters are all stereotypes, but so warmly crafted by the actors and story as to make us believe in them and care about them. And the film as a whole raises the question of whether life has significance and whether having a bigger Story to define our story is necessary to provide meaning in a world made up of what seems to be nothing but meaningless details.

Delightful, genuinely funny, and worth discussing, we recommend Stranger Than Fiction to you.

1. What was your immediate or initial response to Stranger Than Fiction? Why do you think you responded as you did? 2. How effective was the film as a comedy? To what extent does the fact it is a comedy make the point(s) of the story that much more poignant? 3. Did the film ever misuse the limits of humor and comedy—say, by making cruel fun of a character? 4. In what ways were the techniques of film-making (casting, direction, lighting, script, music, sets and backgrounds, action, cinematography, editing, etc.) used to get the film’s message(s) across, or to make the message plausible or compelling? In what ways were they ineffective or misused? 5. Identify and describe, as objectively as possible, each of the main characters in the story. What is their role and significance? 6. With whom do you identify? With whom are we meant to identify? 7. Stories are only as captivating as they are plausible. To what extent did you find the film plausible? How was the film director able to make an unbelievable story plausible? 8. What specific scenes in the film stand out as particularly impressive? What makes them so? 9. The biblical narrative tells a 4-part Story, that of Creation, Fall, Redemption and Restoration. To what extent is this narrative structure echoed in Stranger Than Fiction? How could this connection be explored in terms that skeptical non-Christians might be able to appreciate and understand? How does the novelist’s narration of his life—and particularly his death—bring Harold Crick to see reality in new ways? 10. Explain in practical terms how a larger Narrative or Story gives meaning, significance, and direction to the story of your life.