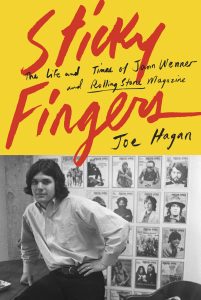 Rolling Stone magazine has always ranked high on my reading list. The reason is that from its beginning in 1967, the magazine took the world of popular culture with the seriousness it deserved. “For the first time in the history of man,” Tom Wolfe says, in the Sixties “young people had the money, the personal freedom and the free time to build monuments and pleasure palaces to their own tastes” [p. 13]. And that changed everything. Rolling Stone has provided me a window of insight into bands, albums, songs and genres that don’t appear in my iTunes listening list. I have also found thinking through the liberal/libertarian political opinion in its pages to be stimulating and helpful.

“Jann Wenner’s oldest and dearest friends,” Hagan notes in Sticky Fingers, “could not help but notice the likeness between Trump and the Jann Wenner they knew. The crude egotism, the neediness, the total devotion to celebrity and power” [p. 503]. For all the vaunted idealism of the magazine’s original vision, Wenner, a narcissistic and mercurial editor used Rolling Stone primarily as his personal ticket to wealth and fame.