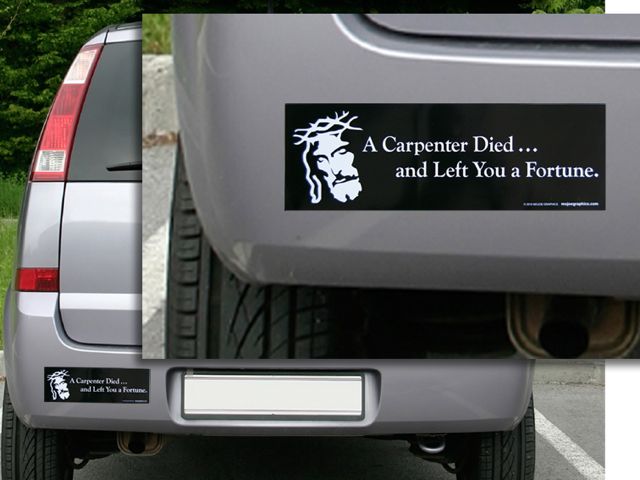 It’s as BAD as you think and they ARE out to get you.

Suburbia: where they rip out the trees & name streets after them.

Proud parent of an honor student.

And your cry-baby, whining opinion would be…?

You’re just jealous because the voices only talk to me.

Bumper stickers and rear-window decals seem to be an enduring form of communication in our sound-bite world. Even friends who say they don’t like them and won’t put one on their own car readily admit to reading the ones they see on other cars. And when we happen on one whose rear end is plastered with stickers, most of us are glad when we roll up behind them at a stop sign so we have time to get through all the sound-bites on display. Still, most everyone I’ve asked seems to have a love/hate relationship with them. Sometimes we’re amused by what we read, sometimes irritated, and occasionally, perhaps, even offended.

And of course, as in every other part of the market, Christians have produced their own. Sometimes it’s the name of a religious school or college, sometimes an advertisement for their church, and sometimes it’s a declaration of some aspect of their faith.

Read the Bible—it will scare the Hell out of you.

We are too blessed to be depressed.

God said it. I believe it. That settles it.

Whatever the topic, it would be a mistake to think that bumper stickers—both as a form of communication and as to what they communicate—should not be reflected on with Christian discernment.

1. What bumper stickers most amuse you? Most irritate you? Most embarrass you? Strike you are most creative (whether you agree or not)? Strike you as most effective? Why?

2. What bumper sticker(s) do you have on your car? Why did you decide to attach them?

3. If you have neither bumper stickers nor rear-window decals on your car, why have you made this choice?

4. Do different generations seem to react differently to bumper stickers?

5. The fish symbol seems to be a popular symbol that Christians choose to display. What does it communicate to the people that see it? Does it merely mean “Christian,” or does it tend to be identified with a certain type of Christian?

6. Is there a place for irony in the messages Christians display? Why or why not? Consider the following bumper stickers:

I strangled Shirley MacLaine in a previous life.

My God can beat up your god.

Jesus loves you but everyone else thinks you’re an a**hole.

Welcome to eternity: smoking or non-smoking?

7. Some bumper stickers are Scripture texts. How effective are they in a post-Christian world? Is it possible they can be misunderstood?

"Every knee shall bow."

"Because I live, you also will live" –Jesus.

9. The two most commonly used Christian symbols today seem to be the fish and the cross, but the history of Christianity is rich in a wide variety of symbols, monograms and shapes. Are they effective? Why or why not? Might it be wise to use less well-known symbols—such as the two illustrated here? Why or why not? [The phoenix symbolizes the resurrection of Christ, and often appears on tombstones; the alpha & omega, the first & last letters of the Greek alphabet symbolize Christ as the beginning and end of all things (Revelation 22:13), here “m”, a letter from the middle of the alphabet is included, referring to Christ the same, yesterday, today and forever (Hebrews 13:8).]

10. The pastors of Providence Presbyterian in Concord, NC are both creative, thoughtful artisans, and have worked faithfully to bring beauty into the life of the church. For the church’s letterhead, web site, and sanctuary they designed a beautifully striking Celtic cross—reproduced here. The weathered, tattered lines remind us that we live in a fallen world, but that Christ entered that world to bring redemption, enduring its most complete expression of brokenness, death on a cross. The cross is available to members as rear-window decals. Respond.