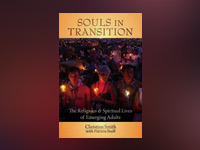 Christian Smith has been following a nation-wide sample of teenagers, using surveys and extensive interviews to track their religious beliefs and values. In 2005 he reported his findings on 13-17 year-olds in Soul Searching, an insightful and probing study. The population he has been following is now 18-23 years old, and he summarizes his updated findings in Souls in Transition.

Scholarly, carefully researched, and clearly written, Souls in Transition should be read and discussed by Christians who are concerned for the spiritual welfare of the postmodern generation. If I had my way I’d make it required reading for parents, church elders, pastors, teachers, and youth workers.

Some of the book thoughtfully summarizes the findings of the research that has been so painstakingly pursued over the years. Some of it reports the data itself, along with case studies to allow the numbers and averages to take on flesh and blood. And throughout Smith reaches conclusions, some of which are surprising, some of which put words to trends many of us had already sensed, and some of which challenge long-held assumptions about faith and religion in our increasingly pluralistic postmodern world.

What becomes increasingly clear is that Christians serious about their faith will need to think beyond the normal clichés which tend to shape the way we seek to pass the faith on to the next generation. Some of us simply keep doing whatever we’ve always been doing, forgetting that the approach was developed at a time long past and in a culture much different from our own. Others set to work with a desire to strengthen the foundations, purify the doctrine, and be uncompromising about the truth. Understandable, as far as it goes, but this approach tends in the end to pacify an older generation more than it convinces a younger unchurched generation with a faith largely devoid of mystery and any resonance with daily life. In other cases the tendency is to be “relevant,” which becomes a catchword for updating things to fit with the sensibilities and aesthetics of a world immersed in popular culture. Again, this can be appreciated for at least understanding that the world doesn’t stand still, but the result is often a faith gutted of its ancient roots, accompanied by shallow music, self-centered worship, and a perverse pride in having thrown over the beliefs and traditions of previous generations.

None of this is sufficient, nor biblical for that matter. Christians must be willing to take the incarnation seriously and follow Christ into a fallen world to befriend and care for unlovable, marginalized, and lost people, seeking to flesh out a demonstration of God grace and presence in every aspect of life and culture. We must cultivate discernment, unhurried lifestyles of hospitality and listening, and be quiet demonstrations of a community of faithfulness that is both countercultural and profoundly human.

Soul Searching can help us in our yearning to be faithful. Smith has essentially spent untold hours talking to postmoderns and now writes up what he has heard so we can learn from his careful listening. Let all those who have ears, hear.