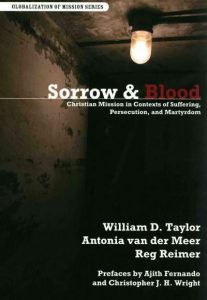 A story imperfectly known
When I was nine years old, a man I had never met or even seen died with four friends, none of whom I had met, in a place far removed from where I was living. I heard the story soon after the event occurred, and read about it later when one of men’s wives, Elizabeth Elliot wrote Shadow of the Almighty (1989). It was, if memory serves, the first time terms like persecution and martyr entered my consciousness. The story helped shape my imagination and expressed in a vibrant way some of the values and ideas that would later become guiding principles for my life. A few years ago a friend traveled to Ecuador, up the Curaray River in the jungle to the spot where the five men died. There he picked up a stone as a gift for me, an ordinary rock a little smaller than my fist. It sits on my desk as I write.

Occasionally I hear the word persecution used. Sometimes it is used in a general way, that persecution occurs against Christians in Africa or Asia. Which is correct—though in those regions persecution is not limited to Christians but extends to Muslims and other religious believers as well. Occasionally the term persecution is used to refer to some negative pushback some Christian has experienced. The event precipitating the pushback is usually some witnessing technique admired as “bold” by the Christian but that is really just a form of bullying.

The apostolic word on the topic of persecution is clear. “Remember those who are in prison,” the author of the epistle to the Hebrews writes, “as though in prison with them, and those who are mistreated, since you also are in the body” (13:3). Thousands of Christians have been martyred for their faith over the last few decades but since the vast majority are not Americans we rarely know their stories well enough to obey this text. And as Americans we often do not have a thoughtfully biblical understanding of what persecution means.

One place to begin is with an impressive book, Sorrow & Blood published by the World Evangelical Alliance. With chapters authored by Christians from around the globe, Sorrow & Blood reviews the data, looks at the topic through the lens of Scripture and theology, provides a series of specific stories, and ends reflecting on how Christians and the church should respond faithfully in a world where religious freedom is often in short supply. Each chapter includes resources for further reading and a few thoughtful reflection and discussion questions if small groups—say, mission committees, elders, deacons, interested believers—decide to read the book together.

“I have to say,” Christopher Wright says in his Preface, “that I often feel a fraud and a coward when it comes to the issues addressed in this book. I know virtually nothing of suffering for my faith in my own life, so who am I to talk about it? All I can do is to keep informed, aware, and prayerful for the increasing number of sisters and brothers in Christ all over the world for whom suffering in one way or another is simply the normal and expected Christian life, and others for whom extreme suffering and degrading death is the gateway to a martyr’s crown.”

One more thing: sometimes important stories and studies are life affirming even as they prompt horror or sadness within us by forcing us to face what life is really, finally all about. So it is here.