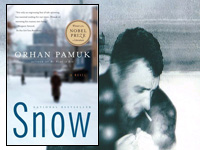 Trying to Find Our Way
We have friends who work for the U.S. State Department, and over the years they’ve accepted posts in countries I’ve known only through the news. That is not a reliable way to know another nation, so I’ve asked Ann and Rusty to recommend novels that capture something of the reality of that nation, or society, or people. Proper histories are helpful to learn the facts—the dates and primary events and main characters and such—but fiction can provide a deeper perspective by allowing you inside a people’s soul. You get past mere geography to discover the contours of meaning that shape a people’s perspective, mold their choices, and inform their destiny. Each time we have read the books they recommended and each time it has felt like moving from blindness to at least partial sight. Each novel has transformed how we understand the headlines and stories in the media, and has informed our prayers as we attempt to follow our Lord’s instruction to pray that his will be done on earth as it is in heaven. When Ann and Rusty were posted to Cuba they recommended Carlos Eire’s Waiting for Snow in Havana. From Romania they recommended The Bridge on the Drina by Ivo Andric. And from Istanbul, Turkey, they recommended Snow, by Orhan Pamuk.

The story of Snow is deceptively simple, the plot animated by dialogue in a small town cut off from the rest of the world by a snow storm that blankets the landscape in white. A Turkish poet named Ka, living in exile in Germany has returned to investigate the suicide of a series of young women but mainly because he still remembers a woman recently divorced whose loveliness Ka cannot dislodge from his mind. The town of Kars is hardly a tourist attraction. It’s an isolated place populated by ordinary workers despairing their lot in life will ever improve, secularists eager that the vision of a modern Turkey birthed by Ataturk not be undermined, Islamists meeting furtively to plan how to stop the slide of their nation into decadence, members of every conceivable political party, and always, everywhere, sometimes hiding just out of sight, sometimes hovering just outside every conversation, police informants watching, listening, reporting. From the beginning we sense the tension that lurks beneath the surface.

Orhan Pamuk won the Nobel Prize for Literature in 2006, the only Turkish citizen to receive that honor. Pamuk, a Muslim, lives in Istanbul where he writes, serving as a visiting professor in the humanities at Columbia University. In Snow, the little village of Kars becomes a metaphor for the Turkey he loves and calls home, a land that uncomfortably straddles West and East while the world holds its breath over whether the compromise can hold. Pamuk stated his views clearly in his Nobel lecture:

What literature needs most to tell and investigate today are humanity’s basic fears: the fear of being left outside, and the fear of counting for nothing, and the feelings of worthlessness that come with such fears; the collective humiliations, vulnerabilities, slights, grievances, sensitivities, and imagined insults, and the nationalist boasts and inflations that are their next of kin… Whenever I am confronted by such sentiments, and by the irrational, overstated language in which they are usually expressed, I know they touch on a darkness inside me. We have often witnessed peoples, societies and nations outside the Western world—and I can identify with them easily—succumbing to fears that sometimes lead them to commit stupidities, all because of their fears of humiliation and their sensitivities. I also know that in the West—a world with which I can identify with the same ease—nations and peoples taking an excessive pride in their wealth, and in their having brought us the Renaissance, the Enlightenment, and Modernism, have, from time to time, succumbed to a self-satisfaction that is almost as stupid.

The one hurdle I faced in reading Snow was some of the dialogue—conversations in Turkey do not follow the usual flow expected when Americans talk. The love for poetry is still very much alive, and conversations in Kars are not efficient and practical but revealing and heartfelt and circuitous. I was reminded that I was the outsider, visiting in the imagination a culture with roots that stretch back to ancient times. This is the land of the Bible thrust into the modern world, the place where St. Paul preached and wrote and established churches. If you visit the seven churches addressed by Christ in the first three chapters of St. John’s Revelation, you will walk on Turkish soil.

It is difficult, I think, for Americans to comprehend the realities of life that many people today face as the normal occurrences of existence. Comfortable with our own view of things we wonder that anyone could see things differently, and why they would persist when there is another way. Since that other way is obvious to us, why wouldn’t it be to everyone? We fail to comprehend how much our view of things has been shaped by a particular set of circumstances and assumptions, circumstances and assumptions most do not share and many would challenge.

Christians of all people should be on the cutting edge of such reflection because we are called to be a missional people. Citizens first of all in God’s kingdom, we are in exile here, aliens and foreigners (1 Peter 1:17, 2:11) in this world, called to be on the move as sojourners to make disciples of all nations and peoples (Matthew 28:19-20). We cannot be faithful if we do not do the hard work of seeing how others see, of loving them enough to understand their worldview so profoundly that we know it better than they do themselves. Only then can we engage them with the gospel. It takes asking questions and listening. One way to listen is to hear their stories. Snow by Orham Pamuk is one such story, brilliantly told, deeply insightful, and profoundly human.