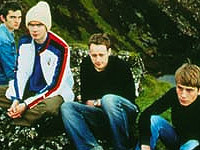 In 1994 three teenagers formed a band in Iceland, naming it after the sister of one of the band members, Sigur Rós, which is Icelandic for “Victory Rose.” In 1997 they released their first CD, Von (“Hope”). It was well received, but primarily in their homeland. Beginning in 2000, however, they won a world-wide following with wider distribution of their albums, positive attention in the music and popular press, by opening for Radiohead, by having one of their songs on the soundtrack of Vanilla Sky, and with concerts in Britain, Europe, the U.S., and Japan.

That much of the story of Sigur Rós (pronounced SI-ur rose) seems unremarkable. Other bands have taken similar paths to popularity, and Iceland was already on the pop culture map with the music of Björk. A closer look—and listen—however, reveals another part of the story of Sigur Rós that needs telling, not just because it’s true and interesting, but because it’s essential to understanding both their music and their popularity.

Behind a vessel of clouds,
a sun wakes up from its lethargy
Refreshes itself with some little raindrops
Plays with the hot flames of the fire
Makes rainbows
“Hafssól” (“The Sun’s Sea”) on Von

There is an ethereal, atmospheric sound to the symphonic-rock music of Sigur Rós. Their stated intention is to bring listeners into “the beautiful landscape of their homeland with their music.” They do that, and more. The New York Times referred to Takk (meaning “Thanks”) Sigur Rós’ latest CD, as “another set of awestruck, shimmering songs that circle through a few stately chords while evolving from near silence to unabashed pomp.” Rolling Stone says Sigur Rós allowed listeners “the pleasures of melodies that sounded like they had floated into the room from another planet.” Using strings, a wide variety of strangely intriguing sounds, a haunting falsetto, and numerous instruments, their music invites us simultaneously to the strange, the sublime, and a spirituality rooted in the earth.

Our Mother, who art in Earth,
Hallowed be Thy name.
Thy kingdom come.
Thy will be done
On us as it is in you.
As you send Thy angels every day,
Send them to us as well
And forgive us our trespasses
As we forgive those
Who trespass against you.
And lead us not into sickness,
But deliver us from evil,
Because yours is the earth
And the body
And the health
Amen.
“Hún Jörô” (“Mother Earth”) on Von

The lyrics of Sigur Rós are as enigmatic as their music—some tracks are purely instrumental, but those with lyrics are sung in either Icelandic or “Hopelandish,” a language the lead singer makes up as he goes along, blending vocalizations into the swirling, soaring music. Fans are encouraged to post their “translations,” and the band has said the best or most popular interpretations will eventually become the “official” lyrics. Their Icelandic lyrics translate into a series of images where impressions rather than distinct ideas seem to float in the imagination. We are invited into a soaring sound rooted in a wild, starkly beautiful world which contains secret hints of a deeper reality.

In Pitchfork, music reviewer Brent DiCrescenzo probes into the ancient pagan myths of Sigur Rós’s homeland to gain some insight into their music. “Icelandic lore tells of the Hidden People who live in the crags and lava of jagged mountains,” he notes. “Descended from the ancient guardian spirit, the Hidden People come in many forms. The tiny blómaálfar dwell in flower blossoms while the common búaálfar reside on farms. Even in this modern age of cellphones and helicopters, Icelanders continue to believe that the Hidden People are still out there somewhere. Construction workers even curve roads around rumored dwellings of the Hidden People. How can a modern people find faith in such fantasy? A heavy cloud of Norse mythology and a breathtaking raw landscape explains much of it. The indigenous music of Sigur Rós can only perpetuate such a religion… Sigur Rós effortlessly make music that is massive, glacial, and sparse. They are Hidden People. Children will be conceived, wrists will be slashed, scars will be healed, and tears will be wrenched by this group. They are the first vital band of the 21st Century.”

Like Radiohead, Sigur Rós seems more intent on making music they (and their fans) love than producing songs that will make it to the top of the charts. It wouldn’t surprise me if their music is found far more often on iPods than as individual hits on the radio.

Now that you’re awake
Everything seems different
I look around
But there’s nothing at all
Put on my shoes, I then find that
She is still in her pyjamas
Then found in a dream
I’m hung by (an) anticlimax
She is with the sun
And it’s out here
But where are you…
Go on a journey
And roam the streets
Can’t see the way out
And so use the stars
She sits for eternity
And then climbs out
She’s the glowing sun
So come out
I awake from a nightmare
My heart is beating
Out of control …
I’ve become so used to this craziness
That it’s now compulsory
“Glósóli” (“Bright Sun”) on Takk

I wish you were in my living room, because I’d introduce you to Sigur Rós by having you watch the music video for “Glósóli,” which can be viewed online (www.sigur-ros.co.uk). A wonderfully simple yet creative film, we watch children on a strange yet enticing pilgrimage in the starkly beautiful and wild countryside of Iceland, drawn inexorably to something beyond. What is this pilgrimage? What is the relationship of the video to the lyrics of the song? How is it that the lilting music of the song seems to invite us to a similar leap of faith?

As a Christian I am drawn to Sigur Rós because in their music I hear an echo of my own heart. A deeply felt yearning for the something more that is hinted at beyond the narrow horizon of the islands we call home. The knowledge that as human beings we are invited to something beyond the broken beauty of the life we have known since birth. The invitation is innate, unrelenting, and certain, built by God into the fabric of our humanness and the glory of creation. We may try to drown out its quiet insistence with noisy busyness, but we can not deny it. Sigur Rós has heard the invitation and now seeks to capture it in music.

What seems to be missing in the lovely music of Sigur Rós is the understanding that the pilgrimage they invite us on is not a safe one. Not just any leap of faith will do—some end not in the clouds but in crumpled wrecks on the rocks at the bottom of the cliff. The voice of mystic and Scripture are united: not every path leads to the light and most leaps of faith end badly. It is not the quality of our trust that finally matters, but what and who we trust.