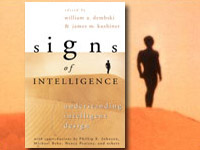 If you have been waiting for a book designed to provide ordinary readers with a basic understanding of the intelligent design (ID) movement, your wait is over. Signs of Intelligence brings together fourteen essays by leading thinkers in the movement, written not primarily for scientists but for the interested lay reader.

ID argues that the notion of intelligent design is already known and used by scientists. Those involved with SETI, for example, the Search for Extra-Terrestrial Intelligence, scan the heavens with radio telescopes listening for a discernable pattern in the random noise generated in universe. As depicted in the film Cosmos, scientists assume that if they happen upon such a pattern they will not only be able to identify it as such, but that it is proper to assume that such a pattern is designed by an intelligent agent.

ID seeks to broaden the application of such thinking more widely in the field of biology, in opposition to a doctrinaire naturalism which insists all complexity is the product of chance. “The world is a mirror representing the divine life,” William Dembski writes. “The mechanical philosophy was ever blind to this fact. Intelligent design, on the other hand, readily embraces the sacramental nature of physical reality. Indeed, intelligent design is just the Logos theology of John’s Gospel restated in the idiom of information theory.”

Chapters include:
“Design and the Discriminating Public: Gaining a Hearing from Ordinary People” by Nancy Pearcey (senior fellow at the Discovery Institute’s Center for the Renewal of Science and Culture; former executive editor of BreakPoint radio).

“The ‘Just-So’ Universe: The Fine-Tuning of Constants and Conditions in the Cosmos” by Walter Bradley (professor of mechanical engineering, Texas A & M University).

“Is Intelligent Design Science? The Scientific Status and Future of Design-Theoretic Explanations” by Bruce Gordon (interim director of the Baylor University’s Science and Religion Project).

The ID movement has been generating controversy—and not merely from secularists and young-earth creationists. One example worth noting involves a review of Phillip Johnson’s book, The Wedge of Truth (InterVarsity Press) in the January 2001 issue of First Things (pp.48-52). The reviewer, Edward T. Oakes, a Catholic priest and professor at Regis University, has some sharply critical comments to make about the quality of Johnson’s arguments and the ID movement as a whole. Fr. Oakes and his critics, including a number of the authors of essays in Signs of Intelligence, have an extended exchange in the April 2001 issue of First Things (pp. 5-13).