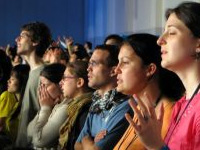 The fact that we live in a religiously pluralistic culture means that we can expect to be exposed to beliefs, values, and practices that are contrary to our Christian faith. This might arise in a conversation over lunch at work, in a lecture at a university, in a film, or during any number of other instances when we naturally rub shoulders with non-Christians. In most of these instances, however, our exposure is somewhat at arm’s length. It involves a theme in a movie, or a comment by a colleague—which might become a topic for conversation, but the thing with which we disagree remains out there, at a distance. We may be uncomfortable by the belief, the value, or the practice that we’ve been exposed to, but it remains in the realm of ideas, and so our discomfort is minimal.

Our discomfort can increase dramatically, however, when the distance decreases and we find ourselves actually drawn into the religious practice in some way. And, truth be told, living in a religiously pluralistic culture means that we should expect this to happen at least occasionally. That being the case, discerning Christians might want to reflect on how to best respond to such situations. One way to prepare ourselves is to discuss the following case study of a Christian who found themselves unexpectedly drawn into the practice of Eastern meditation during a professional seminar.

A Christian attorney attends a continuing education seminar. Besides the plenary sessions led by experts in the field, a variety of elective workshops are offered. Our friend looks over the possibilities, and decides the one entitled “Accepting Our Limits: Practical Ideas for Reducing Stress” looks promising. The workshop facilitator is a fellow attorney who though unknown to the Christian, has the reputation of being a strong family woman and a skilled communicator.

The workshop is divided in half. The first part is a creative exploration of stress in the practice of law. Various causes of stress are identified, and though it is noted that some stress can sharpen one’s creativity and efficiency, inappropriate levels of stress can be deadly to not only the practice of law, but to the attorney’s health, family, and enjoyment of life. Then, in the second half of the workshop, the facilitator announces that she would like to introduce them to a simple technique that she has found particularly effective in reducing stress. Used twice a day, for twenty minutes each time, her practice of Transcendental Meditation has not only reduced her levels of stress, but provides two brief periods each day when she escapes from the noise and clutter of modern urban professional life. You do not need to accept the religious ideas behind the meditation, she says, though she finds them both plausible and comforting. In any case, she outlines the main beliefs behind TM, explains how to meditate, and then leads the group in a 20 minute period of meditation.

The Christian spends the twenty minutes in quiet prayer, determining to plan such quiet time into his daily schedule. Later, he talks with several friends who also attended the workshop, beginning the conversation by asking what they thought of the experience.

All of which, of course, raises a number of questions for discerning Christians to reflect on and discuss.

1. How is the growing religious pluralism in society obvious to you? In what ways does it impact you?

2. What similar situations have you faced personally—or heard about—in our religiously pluralistic culture? How did you respond to them? Why? How satisfied are you with your response?

3. Since it seems clear situations like this will likely increase as time goes by, why don’t Christians discuss them together ahead of time? Why are such discussions often so emotionally charged? To what extent is agreement about such things a measure of spiritual maturity or biblical fidelity? Why?

4. Discuss the case study. Do you agree with the attorney’s response? Why or why not? What texts and principles from Scripture would you point to in order to justify your conclusion?

5. Discuss the reaction of a fellow believer who criticizes the Christian attorney, claiming that silent prayer is not a sufficiently godly response. Since the other participants in the workshop could not distinguish between his prayer and TM, he gave the appearance of evil. He should have refused to participate, just as Daniel’s three friends refused to bow before Nebuchadnezzar’s gold image (see Daniel 3). Also, since it is unlikely that a Christian would have been allowed to give a gospel solution to stress in such a workshop, he should have protested the introduction of TM into what should have been a religiously neutral workshop. The attorney’s choice looks more like cowardice and compromise than it does godly faithfulness. At the very least, he could have quietly excused himself and left. At least then he wouldn’t have given the appearance of participating in false worship.

6. If you believe the attorney’s response in the workshop to be correct, what response by a Christian could rightly be characterized as cowardice and compromise? Why?

7. To what extent is the attorney’s response justified by the conversation he had later with his friends?