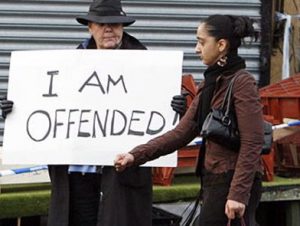 This is only my impression, but I tend to believe that Christians tend to fall into two major categories: people who wear “Christian Tees” and people who would not be caught dead in one. I promise to try to remain completely objective in this article and not let slip that I fall into the second category.

It’s not that I don’t wear tees with slogans on them. I have one from despair.com that I love. It’s message is simple and to the point: i>u. But to wear tees with “Christian” slogans? No.

A friend of mine—minister and artisan Mark Weathers, mentioned the topic in a sermon and then later, in a letter to his congregation. From which I extract a couple of quotes:
It is so easy in our freedom-of-speech country to flippantly speak out against authority and those in positions of leadership. This nonchalant attitude has so influenced the church to a point that we don’t think twice about what we say (or wear) when it comes to Christ. He is the King of Kings, and at the sight of him both Isaiah and John were driven to the ground in absolute humility. They didn’t bow because it was the proper thing to do. No, they bowed because they couldn’t do anything else—not even look at him. And it wasn’t until they experienced the touch of grace that gave them the ability to stand in God’s presence. On the point of Christian t-shirts, there are so many today that flaunt the obnoxious flippancy we have before God. Our allegiance to Christ is poorly demonstrated through 100% cotton tees with some silk-screened piece of ‘borrowed’ art… which leads me to the next point.

There exists a host of Christian T-shirts whose images are nothing more than logo manipulations from popular establishments. To name a few:

HIS WAY (take off from SUBWAY)
All Faith: you’re in good hands (stealing from All State Insurance)
King of Kings (from Burger King)
Got Jesus? (from the Got Milk? campaign)

There are more examples but they’re too obnoxious to list. The point I make is that we—as God’s children who celebrate the reality of God’s image being restored in us—should not be stealing from capitalist America to communicate our allegiance. Further, it is we who should be leading the arts in excellency! All that we do in our areas of ‘creation’ should be excellent and praiseworthy.

1. Which category of Christian do you fall in concerning “Christian” Tees? Why? What is your impression of the people in the other category?

2. How can these two categories co-exist in the sort of loving fellowship Christ requires of his followers?

3. Weathers claims some of the slogans on “Christian Tees” involve “stealing.” Do you agree? Why or why not? 4. What slogans, or types of slogans, do you wear—or would you wear—on a Tee? Why?

5. Weathers says that “Christian” slogans based on company logos is a form of stealing. Do you agree? Why or why not?

6. If you were required to design a “Christian” Tee that you would be willing to wear, what would the slogan (and/or image) be?

7. What are the dangers when Christian witness is based on a slogan? What are the advantages? How should we sort out the pros and cons?