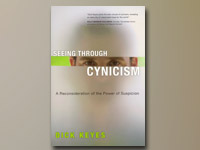 If a loving God is in ultimate control of events on earth, that is a great source of confidence. Even when we cannot figure out what is going on and why, somebody who is both powerful and good can. But with belief in providence comes the temptation to try to “read” it, in the sense of figuring out what God is intending through the events of our experience, looking for a play-by-play running commentary on God’s purposes. This temptation has led many people into terrible follyCas if they could determine whether God is for or against them and their efforts by observing their circumstances. If we think we can read providence, we are likely to think God is on our side when things seem to be going well, and that he is against us when events do not go as we had hoped. Perhaps neither is true.

By contrast, the apostle Paul wrote to the Romans:
O the depth of the riches and wisdom and knowledge of God!
How unsearchable are his judgments and how inscrutable his ways!
For who has known the mind of the Lord?
Or who has been his counselor? (Romans 11:33-34)

Did you notice the words unsearchable and inscrutable? It seems that real faith in God does not need to interpret providence but allows God to be God and admits that his providence may include things completely outside of our understanding. Faith often requires that we obey God while having very little idea of what God intends for our future or what part we may be playing in the larger story.

The apostle wrote a letter to a Christian friend of his called Philemon. A slave owned by Philemon had run away and became a follower of Christ with Paul. Paul wrote a powerful letter to persuade Philemon to release the runaway from the bondage of slavery and welcome him back as a brother in Christ. He then said, “Perhaps this is the reason he was separated from you for a while, so that you might have him back forever” (Philemon 15). Notice that he said “perhaps” this is why things happened as they did. He did not know, so he did not pretend, though it would have sounded more impressive and persuasive if he had said, “God did this so that you would release Philemon!” God might have had quite different intentions.

[Excerpted from: Seeing Through Cynicism: A Reconsideration of the Power of Suspicion by Dick Keyes (Downers Grove, IL: InterVarsity Press; 2006) p. 104-105.]