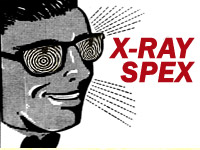 As a boy I loved superhero comic books. I loved the flamboyant graphics, the constantly shifting perspective, the stylized violence, the stories of adventure. I even loved the ads.

The ads look crude by today’s standards. Usually there would be one for Charles Atlas, showing some poor kid being harassed by bullies. The ad promised to change any boy from skinny to muscled, which interested me for obvious reasons. You could order a AGenuine Two-way Dick Tracy Wrist Radio, which in the days before cell phones seemed a really great deal at Aonly $3.98 (plus s&h). “Amazing Live Sea-Monkeys” always made me wonder exactly what would hatch from the eggs you dropped in a bowl of water. (The small print said the “creatures shown in the ad are not intended to depict Artemia”—which I now know are brine shrimp.) And then there was the ad for “X-Ray Glasses.” Some guy would be depicted looking at the bones in his hand or the underwear of a girl. Seeing the bones of my hand didn’t interest me all that much.

I had a secret hiding place, a shelter under the thick drooping branches of a pine tree. Life felt small, with so much (like comic books) identified as unimportant and dangerous. As often as I could I would push under the boughs and sit, lost in a world of my own imagination. I wondered what I would see if I wore the X-Ray Glasses in my hideout. Life would look different.

I remember that now and see the ads for the cheap scams they were. But I also know that my desire wasn=t wrong. Not my desire for the X-Ray Glasses, but the desire that my world be significant, full of life-affirming wonder. That is how God created the world. Only later I understood that if you look at the world from within the perspective of the biblical Story, you will see more richly layered wonder than you can possibly imagine.

I was reminded of that when I came upon an entry in my journal that I had long forgotten; a quote from Who is Man, a book by Rabbi Abraham Heschel (1907-1972):

Praise is meaningful only as an act of joining in the endless song. We praise with the pebbles on the road which are like petrified amazement, with all the flowers and trees which look as if hypnotized in silent devotion.

Pebbles like petrified amazement; flowers and trees hypnotized in silent devotion; praise as joining in the endless song. This is seeing beyond the surface of things into the rich wonder of God’s glory which is in the deeper meaning of creation and life. It’s the sort of seeing I still desire.