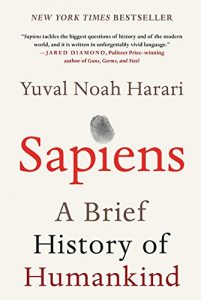 A Secular Story
Yuval Noah Harari, who teaches world history at the Hebrew University of Jerusalem, knows the importance of myth and story. Ideas, to be plausible, must be portrayed in stories that animate hearts and capture imaginations. And in Sapiens (2015) and Homo Deus (2017) he tells just such a story, the story of humankind.

“Culture changes,” Timothy Keller says, “when a society’s mind, heart, and imagination are captured by new ideas that are developed by thinkers, expounded in both scholarly and popular forms, depicted in innumerable works of art, and then lived out attractively by communities of people who are committed to them.” True, but incomplete. If ideas are to gain traction and transform the social imaginary of people they must also be made alive in captivating stories. Such stories will be linked to the enduring myths that address the perennial questions of existence. The power of story is not in illustrating ideas, but in making ideas believable, inviting, and transformative, for blessing or for curse in a fallen world.

In Sapiens, Harari tells the story of humankind from the moment of the Big Bang to the present—and he tells his story attractively. It’s a swashbuckling narrative, spanning millennia with assurance that this is our story, the human story, definitive and exciting. Sapiens sketches a sweeping overview of humankind’s history in four great and decisive revolutions: the cognitive, the agricultural, the unifying (in empire, commerce, and religion), and the scientific. In the process humankind goes from being an “animal of no significance” to the present when we are finally capable of “breaking free of [our] biologically determined limits.” Though conscious of difficulties, Harari’s is an overwhelmingly optimistic vision; he depicts the story of naturalistic evolution as a narrative of unstoppable progress.

If exclusive humanism—the notion that meaning and morality can be found entirely apart from any reference to the divine—is to be believed, it needs a story like the one in Sapiens. And that is the significance of this book. If you are looking for thoughtful reflection on a secular perspective of human history you will not find it here; if you are looking for a lively telling of how many non-Christians in the world of advanced modernity imagine reality, existence and our place in it as human beings, read Sapiens.

Of course, this strength of Sapiens is also its weakness. As a story the book is captivating; as a serious work of world history and ideas it is philosophically simplistic and historically dishonest. The philosophical simplicity comes in Harari’s assumption that there are only two possible perspectives on reality: the naturalistic and the fictional. It is true that he might argue he believes naturalism as a mindset to also be a fiction, but that simply gives an even stronger need to defend his reason in assuming it. Harari admits that, for example, “any meaning that people ascribe to their lives is just a delusion,” but then writes as if all of human history is meaningful, but never seeks to resolve this crucial dilemma.

The historical dishonesty flows out from his secularism—since all other perspectives are fiction, there is no reason to take them seriously. He asks, for example, why modern science arose in the west and not in the east, but never hints that the Christian worldview might be the reason. He portrays slavery as deeply evil but never suggests how an impersonal universe might provide a basis for such morality, or why if in the future slavery is deemed helpful to progress it would still be wrong. He identifies death as a technical problem, certain to have a technical solution, simply assuming no other possible view of death might be philosophically compelling. He uses biblical ideas as headings (A Day in the Life of Adam and Eve, The Tree of Knowledge, Noah’s Ark, The Flood) but then changes their meaning without defending the switch. Repeatedly he speaks of the flow of history, of events, persons and ideas, without acknowledging that historians have long spoken of those things in starkly different terms. Harari is quick to point out the difficult question facing monotheism (the problem of evil) but is silent about any that might challenge naturalism (like meaning and existence). And throughout he assumes that secularity is our natural state, to which we have added all sorts of religious fictions—Harari needs to read Charles Taylor’s A Secular Age, which demonstrates the falsity of this claim.

Still, I recommend Sapiens to you. Christians who are committed to their Lord and his gospel will need to be conversant with this story, because it is believed by so many. And we will need to engage it by telling a better one, the biblical one—that is more satisfying, plausible, attractive and redemptive.

Sapiens ends wondering if the explosive growth of artificial intelligence, technology and scientific discovery will usher in a new stage in the natural progress of humankind in history. It is an optimistic suggestion, though Harari acknowledges that he can’t prophesy what will happen since problems threaten and so many possible choices could be made. Still, he wonders, is the story of tomorrow about how “Homo Sapiens is replaced by superhumans?” It seems to be his hope.

This is the story told in Homo Deus, and though it is not a new story, seldom has it been told with such verve for ordinary readers. Take a look, this story argues, at how advances in bio-mechanics has produced devices that are being implanted in human bodies, from pacemakers to computer powered artificial limbs. Consider how research in artificial intelligence and human thinking is revolutionizing our understanding of the brain, of computer processes, and of consciousness itself. Realize that technological development is advancing exponentially, in ever faster and in more novel directions. Realize too that all these advances have revolutionized modern life and brought good to millions, even in undeveloped parts of the world. In the same way none of us could have imagined cell phones and online shopping in 1947, no one can begin to imagine what lies ahead of us in 2017.

In the process, Harari says, two new religions, or worldviews, better attuned to the human condition will arise:
Techno-humanism aims to amplify the power of humans, creating cyborgs and connecting humans to computers, but it still sees human interests and desires as the highest authority in the universe.

Dataism is a new ethical system that says, yes, humans were special and important because up until now they were the most sophisticated data processing system in the universe, but this is no longer the case. The tipping point is when you have an external algorithm that understands you—your feelings, emotions, choices, desires—better than you understand them yourself. That’s the point when there is the switch from amplifying humans to making them redundant.

Sapiens began with humankind being an insignificant animal; Homo Deus suggests we will now move beyond mere human and become irrelevant. If you doubt the power of story, read Homo Deus to see how this vision is not merely depicted in sweepingly optimistic terms, but as an exciting possibility for the future of humankind.

I recommend Homo Deus. It’s full of ideas worth discussing, ideas being proposed by serious thinkers. The real response, however, comes in a lively retelling of the far more fulfilling and imaginative story told in the book of Revelation.

But know this: our primary response to Sapiens and Homo Deus must be compassion, and a deep grief that those created in God’s image fail to acknowledge him as the reason for being and the hope for tomorrow.