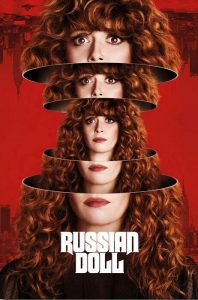 Playing with time, reality and death

Russian Dollis not a movie. It’s a Netflix (2019) series of eight half hour programs that I binge watched because I found it utterly fascinating and could not stop. (The producers sold it as a 3 season series so perhaps more programs are in the pipeline—I certainly hope so.)

Russian Doll, Robert Lloyd wrote in the Los Angeles Times (1/31/2019), “is a beautiful puzzle piece, a circular, multiplane, existential mystery-comedy set in the villages of Lower Manhattan. Peopled with memorable characters large and small, it’s a show that having watched once—not hard to do straight through and hard not to do straight through—you may want to watch again, to admire its machinery and joinery and find the clues you might have missed, but also because it feels just as good the second time around.”

The series is intelligent, well acted, directed and written, fast-paced, philosophically rich and funny. It is also flippantly profane, deeply cynical, morally relative and very entertaining. Welcome to the world of advanced modernity.

Russian Doll should also set aside any lingering misogynist doubts that woman are unable to produce high quality film. The series was created by Natasha Lyonne, Amy Poehler and Leslye Headland and the writers and directors of each episode are women. The music track is brilliant. Lyonne plays the primary character, Nadia Vulvokov, a software engineer who finds herself stuck in her 36th birthday party. She’s caught in a loop of time, where she dies and comes back to the identical spot in her birthday party to relive the day, until she dies again, and returns, but then subtle changes begin to occur and she meets a man who is caught in a similar loop, until his loop links with hers—and the plot thickens. The comparison to Groundhog Day (1993) has been noted, but that was merely an entertaining movie while Russian Doll digs into the big questions of life and reality.

Not since the first season of True Detective (2014) have I seen a television series that is so intentionally philosophical. I am not reading this into the series—I am referring to what the dialogue explores: The meaning of death, whether we are intrinsically good or bad as persons, the purpose of life, how we know what we know, the necessity of community and love, and the reality of time.

In the New York Times (March 3, 2019), Alisha Harris suggests Russian Doll is essentially about “moral evolution,” the need to become good as persons. She points out that Nadia must face the fact that she hasn’t always been good, and in small ways finds she needs to be more caring to the people she encounters. Moral goodness is intrinsic to the story line but as a theme embedded in deeper metaphysical questions not as a lesson in self-improvement.

In one sense Russian Doll is essentially about time. It tells the story of a woman attending her 36thbirthday party who dies in a tragic accident, only to suddenly find herself reliving the day. She is caught in a loop of time that keeps repeating itself—and yet shows signs of progression and change.

As a Christian I can understand the interest in time—we all live in it, we are painfully aware we are winding down towards an end of it and somehow we implicitly sense that the answers to our ultimate questions can only be found beyond time’s reach. Remember how God revealed himself to Moses so many millennia ago. God appeared to him in a burning bush as Moses was following a flock of sheep and told him that he should return to Egypt and lead God’s people out of slavery into a land of promise.

Many Christians do not realize the significance of this text. The fact that God identifies himself as I AM changes everything.

In so naming himself God reveals himself to be outside of time, its originator who is not subject to its demands. He stands, as it were, in an infinite present, so that what we experience as past, present and future simply is, to him. This is why his promise of justice in the future is not limited to merely stopping injustice at some point in time and punishing evildoers. How could it? We do not know what this will look like, for we are creatures in time, but it is what C. S. Lewis referred to as “heaven working backwards” so that righteousness will be fully vindicated and redemption made complete.

Storytellers and mythmakers have always imagined transcending time. It is, even when expressed in humanist terms, ultimately a yearning for God.

Russian Doll takes our present cultural moment into a loop of time, with death and return, death and return until it becomes clear that individualism is insufficient if human beings are to flourish as persons. Along the way, the ideas and values of our secularized world are depicted and explored by a woman who finds mystical connections between people and hints of a deeper mystery in reality difficult to refuse.

Russian Doll begs to be discussed. “Russian Doll draws viewers in,” Hank Stuever wrote in The Washington Post (2/3/2019), “with questions large and small about death, depression and the redemptive power of friendship.” The series raises questions, important questions, identifies the predominant values and convictions of our post-Christian culture and provides no definitive final answers. In this too it is postmodern, comfortable with ambiguity and multiple conflicting possibilities, uncomfortable with traditional solutions to the perennial issue of finding oneself facing the reality of death.

What was your initial or immediate reaction to the series? Why do you think you reacted that way? What does this say about you?

Consider the series in detail as a work of cinematic art. In what ways were the techniques of television (casting, direction, lighting, script, sets, action, cinematography, editing, etc.) used to get the series’ message(s) across, or to make the message plausible or compelling? In what ways were they ineffective or misused?

How was music used in Russian Doll? How did it add to the effectiveness of the story?

With whom did you identify in the film? Why? With whom were we meant to identify? How do you know? What difference does it make?

Within the dialogue several possible explanations are given for how to understand the time loop of death and return in which Nadia is caught. What are they and what is their significance?