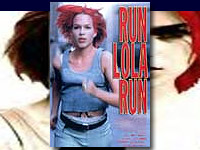 It is frankly difficult to review Run Lola Run. Not because the plot is so complicated that it frustrates attempts to summarize it, but because it’s so simple that you may think the film isn’t worth seeing. Yet it is worth seeing, for few films of recent years are so entertaining, so creative technically, and so profoundly and consciously postmodern.

The movie opens with a narrator listing the Big Questions of life, and then giving an answer with postmodern ironic detachment. Then we meet Lola, whose boyfriend is phoning to say he is about to meet his doom. Manni, a small-time errand boy for a gangster, has lost a package containing 100,000 Deutsche marks he was supposed to pick up for his ruthless boss. The plan had been that he would get the package, and then Lola was supposed to pick him up in a car, but she was late, and things had unraveled from there. Now he is calling from a public phone in town, desperate, to say that in 20 minutes his murderous boss will arrive expecting the money. Lola tells him to wait, rushes out of her room, and runs through the city towards him. As she runs, chance encounters with strangers change lives, and alters her own race against time. Then, just as she arrives to meet Manni, the film takes us back to the beginning, and the story is told a second time, and then a third. Three times Lola runs through the streets, in and out of buildings, with chance encounters with strangers, in a race for life. Each time the encounters are slightly different, and so are the effects that ripple out from them; we watch the same story three times, but each time it unfolds differently.

In Run Lola Run, life is a fragmented series of largely unrelated coincidences, in a reality in which, in the end, only relationships really matter. “I wanted Run Lola Run to grab the viewers and drag them along, to give them a roller-coaster ride,” Director Tom Tykwer says. “I wanted the sheer, unadorned pleasure of speed. A wild chase with consequences… What happens is absolutely universal as far as both theme and content are concerned. It is this woman’s passion alone that brings down the rigid rules and regulations of the world surrounding her. Love can move mountains, and does. Over and above all the action, the central driving force of this film is romance. The film could just as easily be set in Peking, Helsinki or New York, the only thing that would change is the scenery, not the emotional dimension. I think everyone, truly everyone, can identify with Lola.”

Run Lola Run is a cinematic delight. It deals with issues worth discussing, and does so with wit and creativity. The meaning of life and death, the significance of relationships, and the fragmentation of postmodern consciousness are explored in a way that invites reflection. That is an achievement in itself, since in one sense it is a frantic film, which hardly seems to be a formula designed to invite reflection. Yet, contrary to our expectations, it does exactly that. “The action of the movie is rush, rush, rush,” The New Yorker comments, “but the effect is contemplative, almost metaphysical.” The movie is also technically delightful, with superb attention to detail. “The film was storyboarded very precisely because so many details were involved.” Tykwer says. “Where exactly was each person standing in each scene? How does the camera only show what’s important and nothing else? On top of that, of course, we’re also telling a story that is played out during a particular interval of time on the same day. That means that the weather and the light both have to be identical. One really crazy aspect was all the clocks that keep coming into shots everywhere—we spent hours discussing whether it was seven minutes or six in some scenes.” And the music works wonderfully as well, some written originally for the film, and some, like Charles Ives’ “The Unanswered Question,” poignantly used to great effect.

Run Lola Run can serve as a window of insight for believers who wish to be discerning, and a point of contact to talk about issues that matter with those who do not share our deepest convictions.

1. How did you react to the film? Why did the director go this route? How is music employed throughout the film? 2. In the introduction, among other things, the narrator says, “The ball is round, the game is 90 minutes—the rest is just theory.” How does this quote structure and interpret the film? What is the film’s view of the nature of time? What worldview(s) do you detect here? How do we know what we think we know? In the end, is it always the same question and the same answer? What is the question? The answer? 3. How does the narrator hold the different sequences in the film together? Discuss the cinematography; does it serve the content? How so or why not? Note, in particular, the number 20, spirals, and Lola’s screams (what role does each play?) 4. Near the beginning, Manni quotes Lola as saying “love can do anything.” Do you agree? Why or why not? Is this a realistic expectation? How does the film define love? What is the role of love in the film (Tykwer is quoted as saying that the film is a Romance)? 5. What is the purpose of the two love scenes? How do they affect your view of Lola and Manni? What are the questions beneath their questions? Do you think these are universal questions? How so or why not? Do they find answers? 6. The sequences with Lola and Manni are shot on 35mm film, and the others, where Lola and Manni aren’t involved, are on video. Why does the director do this? What is the purpose of the snapshot fast-forwards of the characters Lola intersects? 7. Most films use music to signal certain things; in Lola, music backdrops the entire film save a few moments. What is the significance of the musicless moments? The scenes where the music changes tone? 8. What is the significance of the blind in the film? 9. Throughout the film, did you find yourself rooting for Lola and Manni? Why or why not? How does the director move you this way? As a Christian, if you found yourself pulling for them, how do you reconcile that with the fact that they’re involved in “bad” things? 10. What changes between the three sequences? Discuss, specifically, the moments around the casino: What is Lola doing when she’s saying “wait” over and over? When Lola leaves the casino and runs through the square, the camera films her from the ground, from a human perspective, whereas the first two times she ran through were from above, from a higher perspective. Why the change? What does this indicate? 11. If the movie suggests that time is circular, and that ultimate outcomes (refer back to the bedroom conversations) are determined, what part do people play in the big picture? If there is an ultimate cause, what part do people play? Are they responsible for their actions? If not, what gives them worth? What does the film suggest? 12. What is the purpose of life? How do you know? How do you know that you know?