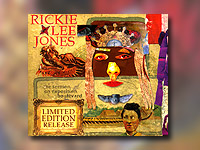 Back in the Eighties, film writer, director, and producer Robert Lee Cantalon decided to “write the words of Jesus in modern language, and publish them outside the New Testament.” So he launched a project that took him across Europe, to libraries and universities, until The Words of Jesus was published in 1997 (New Haven Press). He thought he’d like to produce a spoken-word recording from the book, and invited singer Rickie Lee Jones to participate. Jones read the lines Cantalon had chosen for her and after a pause, said she’d rather sing them. The Sermon on Exposition Boulevard is the result. “I have known for a long time that the only song is the song to God,” Jones says in the liner notes, “but never dreamed of hanging a sign on the door and saying, ‘This where he lives, what he does. These are his hours, from page to page, from church to church.’ I agreed to look at the pages, knowing they were alive. I held part of myself still so I would hear the tinniest drop from the page. I kept my beauty hidden from me so that only God would see it, and in it, stretched out to sweetly linger near. What we learn there, near the dreams of God, we bring back and find a hundred things that fit into places they did not fit before. We look up and remember that we came from a home we had forgotten we had built.” The Sermon on Exposition Boulevard is a musically poetic experiment in creative spirituality. Christians who love Jesus will find much to reflect on and discern as they listen.