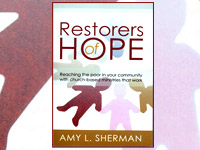 Much that is written about poverty can be rather depressing. Wearisome debates between Left and Right, manipulative pieces designed to evoke guilt, rants about welfare reform, endless theorizing, and—perhaps most wearisome of all—authors who assert or imply that anyone who disagrees with them lacks true compassion. If we wish to live faithfully before the One who became poor so we could made rich, however, we dare not ignore our responsibility. Nor can the Christian community isolate itself in prosperous neighborhoods and expect the world to take its message seriously. And if any of that is in doubt, reviewing even a few of the more than 400 texts of Scripture on the topic should set the record straight:

He who oppresses the poor shows contempt for their Maker, but whoever is kind to the needy honors God. (Proverbs 14:31).

“Suppose there is a righteous man who does what is just and right. He does not eat at the mountain shrines or look to the idols of the house of Israel… He does not oppress anyone, but returns what he took in pledge for a loan. He does not commit robbery but gives his food to the hungry and provides clothing for the naked. He does not lend at usury or take excessive interest… He follows my decrees and faithfully keeps my laws. That man is righteous; he will surely live,” declares the Sovereign LORD (Ezekiel 18:5-9).

When the Son of Man comes in his glory, and all the angels with him, he will sit on his throne in heavenly glory. All the nations will be gathered before him, and he will separate the people one from another as a shepherd separates the sheep from the goats. He will put the sheep on his right and the goats on his left. Then the King will say to those on his right, “Come, you who are blessed by my Father; take your inheritance, the kingdom prepared for you since the creation of the world. For I was hungry and you gave me something to eat, I was thirsty and you gave me something to drink, I was a stranger and you invited me in, I needed clothes and you clothed me, I was sick and you looked after me, I was in prison and you came to visit me.”

They also will answer, “Lord, when did we see you hungry or thirsty or a stranger or needing clothes or sick or in prison, and did not help you?” He will reply, “I tell you the truth, whatever you did not do for one of the least of these, you did not do for me” (Matthew 25:3146).

Religion that God our Father accepts as pure and faultless is this: to look after orphans and widows in their distress and to keep oneself from being polluted by the world (James 1:27).

If anyone has material possessions and sees his brother in need but has no pity on him, how can the love of God be in him? Dear children, let us not love with words or tongue but with actions and in truth (1 John 3:17-18).

Dr. Amy Sherman is Director of Urban Ministries at Trinity Presbyterian Church in Charlottesville, VA. She has written Restorers of Hope, a book which is soundly biblical, intensely practical, and supremely encouraging. Biblical in that she begins with the basics, setting the entire issue in its proper Scriptural context, helping us to understand how a ministry of mercy is foundational to Christian faithfulness in a fallen world. Practical because Restorers of Hope explains how God’s people can make a real difference, providing concrete ideas and clear guidance for establishing ministries that bring good news to those caught in poverty. And encouraging because she profiles several church-based ministries which shine like beacons of hope in this sad world.

Church leaders need to read Restorers of Hope with an eye to whether the community they shepherd is being faithful. Any church which imagines it can safely ignore mercy ministry needs to take another look—at both the gospel and society. Those who are discouraged over the apparent lack of impact of Christians in modern society should read Restorers of Hope for the evidences of grace Dr. Sherman relates. There are at least seven communities of believers—in Chicago, Washington, D.C., Detroit, Richmond, Birmingham, Phoenix, and Dallas—who are being obedient to the gospel by caring for the “least of these.” Their stories alone are worth the price of the book.

We recommend Restorers of Hope to you. It convicted me, encouraged me to greater faithfulness, and demonstrated what thinking Christianly looks like. May it do the same for you.