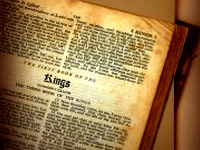 Here’s the situation: A non-Christian friend asks how I can possibly take Old Testament laws against homosexuality seriously when other laws make provisions I obviously reject—such as buying slaves or stoning someone who works on the Sabbath.

Alert readers may notice this is actually a continuation of a discussion which began in the article, “Questions for Dr. Laura.” In that article I raised an exercise in discernment around a letter to Dr. Laura which was posted on the Internet. The writer objected to her appeal to Old Testament law to characterize homosexuality as an “abomination,” and asked her advice on other aspects of the law. “I have a neighbor who insists on working the Sabbath,” the writer says. “Exodus 35:2 clearly states he should be put to death. Am I morally obligated to kill him myself?” I noted that there were two issues worth discussing. The first involves the controversy surrounding the comments Dr. Laura allegedly made on her radio program—which I addressed in “Responding to Questions About Dr. Laura.” The second challenge involves explaining the Christian’s approach to Old Testament law in general, and to homosexuality more specifically. Both of these are addressed in this article (on law) and in Mardi Keyes’ essay, “Homosexuality: Speaking the Truth in Love.”

Please bear in mind that I am approaching this as if it were a conversation with a friend; not merely as a response to the letter addressed to Dr. Laura. I will begin with what I’d probably say to my friend, then give more details (which could be discussed if my friend is interested and the conversation warrants), and finally raise a few questions.

Remember this is supposed to be a conversation. Christian apologetics—especially when responding to challenges raised by non-Christian friends—does not consist merely of winning an argument. It must be, rather, an open-hearted effort within a give-and-take conversation to provide meaningful reasons for our faith. Our goal is not to win a debate, but to listen with care and to speak with warmth. And since Christ taught that the final apologetic is love, our attempt to speak the truth must be matched with an ongoing and practical effort to live out that truth in committed friendship, even at cost.

Since this is a conversation, much more could and should be said. I would invite you to join this ongoing conversation by telling us what you would say, and why. Have I left something out? Could I have explained something more clearly? Do you have questions about something I’ve included?

What I’d probably say…
Good question. Your question assumes that all the Old Testament laws are equally valid today, but that’s not the Christian understanding. I do believe God has revealed himself in the Bible, and so I take his law seriously, but not the way your question implies. More important, though, as a Christian I am called to follow Jesus, and he came as a servant, not a judge. He treated every person as created in God’s image, as precious, worthy not only of true friendship, but actually worth even dying for. I, too, am to be a servant and friend, not a judge.

More detail, as the conversation warrants…
As a Christian I believe Jesus is both divine Lawgiver and Judge, but when he entered space and time as a baby in Bethlehem, he came as a Servant. He did not come to make sure the laws and penalties listed in the Old Testament were followed. Nor was his ministry like that of the Old Testament prophet Elijah who warned the people about worshiping idols, and when they wouldn’t stop, taunted the priests of Baal, and finally executed them (1 Kings 18:16-46). Instead, Jesus befriended people like prostitutes who would have been executed if the law had been followed (Matthew 11:19). He was never dismissive of sinners, but loved them, and didn’t even judge those who rejected him. He even prayed for the very people who crucified him, that God might forgive them. And to make all this clear to his followers, he told them he had the power to judge and punish (Matthew 26:52-54), but refused to use it.

One time Jesus was walking with his disciples through a province known as Samaria (John 4)—which Jews usually tried to avoid since they hated the Samaritans. In any case, tired and thirsty, he asked a Samaritan woman for a drink and soon they were talking not just about water, but about spiritual thirst, about the yearning for transcendence. Jesus makes the astounding claim to be the source of what satisfies that yearning, but the woman deflects the issue, implying she has no such yearning that needs to be fulfilled. So Jesus asks her to go get her husband, but she has none, she says. Quite right, Jesus replies—you’ve had five husbands, and you are living with a man right now without being married to him. The woman is shocked that he would know, and suddenly realizes she is talking to a prophet. In asking that simple question, Jesus put his finger on the evidence of her spiritual yearning, a yearning that has driven her from relationship to relationship seeking something that will finally satisfy. It’s the turning point in the conversation, and she quickly comes to believe in him, becoming his disciple. But notice: this sort of sexual behavior would have warranted death under the law, but Jesus never chides her for her behavior. He brings it up not to judge her, but to help her face, in the clearest way possible, her spiritual yearning and his ability to satisfy it.

What is more, Christ calls his disciples to follow his example. We are supposed to be servants, to love people, not to call down judgment on law-breakers (Luke 9:51-56). Judging would be arrogant, since if the law tells me anything, it tells me I am a sinner. I have broken God’s law, and am in need of divine forgiveness. I am sent not to judge, which God reserves for himself alone, but to represent Christ as an agent of reconciliation and healing and grace and forgiveness.

Christians will be concerned about all sorts of cultural and moral issues, because Christ is Lord of all. Nevertheless, whatever we say and do about such issues must never subvert our calling as his ambassadors of reconciliation. The test of our faithfulness in this is not merely that we speak the truth, but also that our fellow-sinners can be our friends. After all, that was the response sinners had to Christ. He was perfectly righteous, never compromising, but rather than his righteousness repelling sinners, they were attracted to him—after listening to him teach they invited him home, ate dinner with him, and wanted to talk. It’s easy to fulfill this with people whose sins we feel “comfortable” with, but that isn’t sufficient. My desire is that even after I have explained the Christian understanding of homosexuality, homosexuals will feel welcome to talk to me, knowing that I neither hate nor despise them, but desire to be their friend. They may still reject me, of course, but this must be my goal. “Unless we demonstrate grace,” Jerram Barrs insists, “we have been unfaithful to Christ. To what extent? Until they crucify us. To want to judge our enemies now may seem natural, but it is anti-gospel and anti-Christ. It is similar to Peter saying No to the cross because he wanted his agenda of Christ’s enthronement as King and Judge to occur instead. And to that Christ said, ‘Get behind me, Satan.’”

One of the stories that captures my imagination is of the hero who dies so another can live. It’s one reason why The Matrix and Saving Private Ryan are such compelling films. These stories of redemption touch us deeply, and I believe they find their ultimate fulfillment in Jesus. He is the innocent one who served even though it cost him his life.

Just as Christ took the Old Testament seriously—as the word of God—so I must take it seriously as his follower. Taking it seriously, however, means I must make proper distinctions about the various types of laws found in the Old Testament. (This isn’t merely the Christian understanding, by the way. It’s a Jewish understanding as well.) Old Testament law falls naturally into a number of different categories, and those categories matter. The political, economic, or judicial laws, for example, applied directly to ancient Israel when the people of God were a single nation. In Christ, however, the church is transnational (1 Peter 2:9-10; Revelation 7:9), so they don’t apply directly to the church today. Then there is what’s called the ceremonial law, involving issues of purity and diet which were explicitly given to make God’s Old Testament people separate from the surrounding pagan nations (Deuteronomy 4:5-8; Mark 7:15-19; 1 Timothy 4:3-5). The New Testament makes clear that Christians no longer have to regard certain foods as unclean, but we are called to a life of holiness. The sacrificial laws were fulfilled in Christ, who came as the ultimate sacrifice, the Lamb of God (John 1:29; 1 Corinthians 5:7; Hebrews 9:11-10:18). The New Testament insists that Christ fulfilled the sacrificial law, yet interestingly, the ceremonial language is used to describe the Christian’s life of faithfulness. We are to present not a lamb, but ourselves as “living sacrifices” (Romans 12:1), and our worship of God is called a “sacrifice of praise” (Hebrews 13:15; see also 1 Corinthians 5:8; 2 Timothy 4:6; 1 Peter 2:5). Taking Old Testament sacrificial law seriously as a Christian means I understand it as no longer directly applicable because in Christ it finds it’s final fulfillment. And finally there is the moral law, echoed in both Old and New Testaments, and summarized in the Ten Commandments. As a Christian I believe it reveals a basis for ethics. The Old Testament laws dealing with homosexual behavior are part of the moral law and are echoed in the New Testament (Romans 1), unlike, for example, the ceremonial food laws which are repealed (Acts 10). And though I reject public denunciations of certain sins as “abominations,” I believe the moral law of the Bible reflects a deep understanding of what it means to be human, providing a basic ethical framework for living together in community before the face of God.

Do you feel judged by me? By other Christians? How do I/we communicate it?

How do you determine right and wrong? How do you know you are right? What happens if you are wrong?

Have you ever read the story of Christ in the New Testament for yourself? Would you be willing to read through a gospel with me?

The quotes by Jerram Barrs and much of this material is adapted from a lecture by him given at the 2001 Schaeffer Institute Summer Study Program.