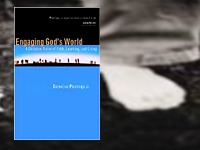 “John Calvin believed that an unredeemed life keeps oscillating back and forth between pride (‘I’ve made it!’) and despair (‘I’ll never make it!’). In his view, redemption gives people security, or (one of Calvin’s favorite words) repose. His idea was that those who lean into God’s grace and let it hold them up can then drop some of their performance anxiety.”

Repose: to lie at rest, calmly and at ease; to depend on; to be tranquil, quietly having peace of mind, freedom from worry.

When I read that paragraph in Cornelius Plantinga’s book, Engaging God’s World, two things immediately popped into my mind. The first was that I certainly don’t hear that word—repose—used very often. The second was that I don’t hear it used very often of me.

Being a student again after so many years means that some of what I do now is actually being graded. And being a student with two grown daughters means that there are three women in my life who have informed me that they expect to see those grades. Funny the ways the Lord can use to reveal that we aren’t as free of performance anxiety as we may have thought.

The question worth asking, of course, is that if repose seems fleeting to me, why haven’t I learned to lean into God’s grace and let it hold me up?

“Christians have been put in a solid position where the reform of culture is concerned,” Plantinga continues: “we have been invited to live beyond triumphalism and despair, spending ourselves for a cause that we firmly believe will win in the end. So, on the one hand, we don’t need to take responsibility for trying to fix everything. The earth is the Lord’s, and he will save it. On the other hand, we may take responsibility for contributing what we uniquely have to contribute to the kingdom, joining with many others from across the world who are striving to be faithful, to add the work of their hands and minds to the eventual triumph of God.”

It’s sad how fleeting repose can be, how easy it is to oscillate between pride and despair, even for the people of God. And unless I’m mistaken, our frantic world is yearning to find a source for true and lasting repose. “Leaning into God’s grace and letting it hold me up.” That’s more than merely a nice turn of phrase—living it day by day before a watching world would be a radical demonstration that God exists, that grace is real, and that hope is more than a pipe dream.