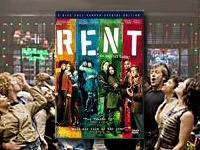 Jonathan Larson began working on his rock musical in 1989, and it finally opened in 1995. It’s hard to break into the world of Broadway. The month before Rent opened Larson had to sell some books to get enough cash to see the film, Dead Man Walking with a group of friends. In one of the final rehearsals the director and Larson were singing one of the songs together when Larson said someone should call 911—he had a sharp pain in his chest. An ECG revealed nothing wrong, and the doctors sent him home. A few days later Larson died of a ruptured aorta aneurism. He was 35.

Rent went on to win 4 Tony awards in 1996, including Best Musical, and a Pulitzer Prize. As of this year (2005) it is beginning its tenth year on Broadway. Far more impressive, however, has been the response of so many young adults who have seen it—and seen it, and then seen it again. Tom Beaudoin expresses his response to Rent this way in the opening lines of his book, Virtual Faith: The Irreverent Spiritual Quest of Generation X.

My most recent religious experience happened in the third row at the closing performance of Rent. On May 25, 1997, the Shubert Theater in Boston was packed with twenty- and thirty-somethings who resonated with the themes of this quintessential GenX musical. Having played in Boston for six months, the cast had established an intimate relationship with the audience, many of whom had attended dozens of shows (I myself went four times). At various moments during the performance, tears streaked the faces of the cast members. At times 1 would look up through my own damp eyes to see the entire section around me weeping. During some songs, people raised their hands in the air as if at an evangelical revival. They seemed to acknowledge that the drama—the liturgy—was about us and yet beyond us, giving meaning to our lives, and life to our fragmented existence.

Beaudoin is correct to argue for the importance of popular culture in the postmodern yearning for meaning and spirituality. He is also correct to note that Rent in particular resonates in the hearts and imaginations of a generation.

Margie and I saw the film at a weekday matinee, in an almost empty theater. We sat a row behind a young couple who leaned forward through most of the film, occasionally wiping their eyes. As the final credits scrolled across the screen, the young woman sat crying, hunched over, holding her face in her hands. Another couple stood and hugged each other, sobbing. A friend mentioned to us that their son, a non-Christian, saw the play four times and wept through it every time.

Rent is loosely based on Puccini’s opera, La Boheme. Whereas the opera was set in Paris in 1830, Rent is set in New York City in the early Nineties; the specter bringing death this time is not consumption (TB), but AIDS. Mimi dies in both versions, and we hear snatches of Puccini’s music in guitar solos, but Larson’s update is a postmodern reading of life.

The heart may freeze or it can burn.
The pain will ease if I can learn.
There is no future. There is no past.
I live this moment as my last.
There’s only us. There’s only this.
Forget regret, or life is yours to miss
No other road. No other way.
No day but today

There’s only yes. Only tonight.
We must let go, to know what’s right.
No other course, no other way.
No day but today.

I can’t control my destiny.
I trust my soul.
My only goal is just to be.
There’s only now. There’s only here.
Give in to love, or live in fear.
No other path. No other way.
No day but today.
[“Another Day”]

I won’t try to give a summary of the story line, not because there isn’t one, but because the plot isn’t really central to Rent. It is the characters that are central, and their yearning for meaning and a love that will last in a cold and heartless world.

There is another aspect to Rent that Christians need to have ears to hear and eyes to see. It is generally assumed that Gen-Xers are relativistic, and that Rent simply celebrates an easy-going relativism in lifestyle and sexuality. But the characters depicted in Rent, like the Gen-Xers they represent, hold strong moral notions. Much of the plot surrounds a community-wide protest against unjust evictions, and the marginalized and powerless in society are seen as having dignity as people even if they are held in contempt by the prosperous and the powerful. People in our postmodern world are far more complex than the over-simplified philosophical boxes we like to use to categorize them.

The message of Rent is a simple one: there is nothing more damning than to be finally alone, and nothing in life, not jobs, or success, even health are sufficient for meaning if we do not have love. We live only in this moment, and do not know how many more moments we have. And there is nothing—but nothing—like aloneness and death to drive that home.

1. What was your initial or immediate reaction to Rent? Why do you think you reacted that way? 2. How different was your reaction from that of Tom Beaudoin? What accounts for the difference? 3. A stage production of a play is always more intimate than a film of the play—what might be lost in the film version? How might that change your response to Rent? 4. In what ways were the techniques of film-making (casting, direction, lighting, script, music, sets, action, cinematography, editing, etc.) used to get the film’s message(s) across, or to make the message plausible or compelling? What is attractive? How is it made attractive? In what ways were they ineffective or misused? 5. With whom did you identify in the film? Why? With whom were we meant to identify? Discuss each main character in the film and their significance to the story. 6. What insight(s) does the film give into the way postmodern people see life, meaning, and reality? 7. What have you heard about Rent from those who do not share your faith? What do you make of their response to the film (or play)? 8. What songs most captured your imagination? Why? I have had Christian young adults tell me that the film moved them deeply, and that they found most of it portraying a Christian message of grace. How would you respond? 9. How comfortable would you be befriending people like those portrayed in the film? What does this reveal about your faith? What plans should you make?