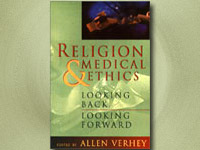 In 1993 The Institute of Religion sponsored a conference at which the papers gathered in this volume were presented. This is the first in a planned series of books on religion and health care to be published by the Center. The editor, Allen Verhey, is the Evert J. & Hattie E. Blekkink Professor of Religion at Hope College, Holland, MI.

“Religion and the Roots of the Bioethics Revival” by David Smith (Professor of Religious Studies, Indiana University).

“The Marginalization of Religious Voices in Bioethics” by Stephen Lammers (Helen H. P. Manson Professor of Religion at Lafayette College).

“A New Era for Bioethics: The Search for Meaning in Moral Experience” by Warren Reich (Professor of Bioethics at Georgetown University School of Medicine).