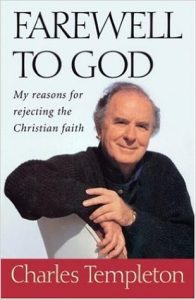 One of the selections Christopher Hitchens includes in his The Portable Atheist is from A Farewell to God by Charles Templeton. In it, Templeton raises a series of probing questions; the sort of questions which are often raised when belief in God is discussed. They are the sort of questions for which theists need to have good and sufficient answers. This is certainly true for Christians, since we claim to believe not simply a set of morals which work or a set of ideas that are satisfying—we claim to believe in and follow someone who claimed to be the Truth.

This does not mean, of course, that we must have answers immediately, already worked out in advance. No one has all the answers—we are finite creatures. When I married my wife we made a lifetime-until-death-whatever-comes commitment. We made that commitment believing we knew one another well enough to fulfill our love in marriage, but we did not know each other as fully as we do now. The problem is not failing to know an answer to some particular question about our faith; the problem is in not taking such questions seriously. A faith worth holding is an examined faith.

Having integrity as a theist requires that we face challenges to our faith with honesty. We need not fear nor be defensive, but be glad for a chance to reflect on the things that matter most. Allowing challenges remain unanswered is unwise for two reasons. First, it tends to subtly undermine our conviction concerning the truth of our beliefs and fosters doubt. And doubt, when it is allowed to fester, can blossom into disbelief. Second, leaving challenges unanswered tends to give the appearance that theism consists of blind leaps of faith in the dark, and can not be maintained with intellectual integrity. And as many better minds than mine have shown over many centuries, that simply isn’t the case.

· Is it not likely that had you been born in Cairo you would be a Muslim and, as 840 million people do, would believe that “there is no God but God and Muhammad is his prophet”?

· If you have been born in Calcutta would you not in all probability be a Hindu and, as 650 million people do, accept the Vedas and the Upanishads as sacred scriptures and hope sometime in the future to dwell in Nirvana?

· Is it not probable that, had you been born in Jerusalem, you would be a Jew and, as some 13 million people do, believe that Yahweh is God and that the Torah is God’s Word?

· Is it not likely that had you been born in Peking, you would be one of the millions who accept the teachings of the Buddha or Confucius or Lao-Tse and strive to follow their teachings and example?

· Is it not likely that you, the reader, are a Christian because your parents were before you?

· If there is a loving God, why does he permit—much less create earthquakes, droughts, floods, tornadoes, and other natural disasters which kill thousands of innocent men, women, and children every year?

· How can a loving, omnipotent God permit—much less create encephalitis, cerebral palsy, brain cancer, leprosy, Alzheimer’s, and other incurable illnesses to afflict millions of men, women, and children, most of whom are decent people?

· How could a loving Heavenly Father create an endless Hell and, over the centuries, consign millions of people to it because they do not or cannot or will not accept certain religious beliefs? And, having done so, how could he torment them forever?

· Why are there literally hundreds of Christian denominations and independent congregations, all of them basing their beliefs on the Bible, and most of them convinced that all the others are, in some ways, wrong?

· If all Christians worship the same God, why can they not put aside their theological differences and co-operate actively with one another?

· If God is a loving Father, why does he so seldom answer his needy children’s prayers?

· How can one believe the biblical account of the creation of the world in six days when every eminent physicist agrees that all living species have evolved over millions of years from primitive beginnings?

· Is it possible for an intelligent man or woman to believe that God fashioned the first male human being from a handful of dust and the first woman from one of the man’s ribs?

· Is it possible to believe that the Creator of the universe would personally impregnate a Palestinian virgin in order to facilitate getting his Son into the world as a man?

· The Bible says that “the Lord thy God is a jealous God.” But if you are omnipotent, omniscient, omnipresent, eternal, and the creator of all that exists, of whom could you possibly be jealous?

· Why, in a world filled with suffering and starvation, do Christians spend millions on cathedrals and sanctuaries and relatively little on aid to the poor and the needy?

· Why does the omnipotent God, knowing that there are tens of thousands of men, women, and children starving to death in a parched land, simply let them waste away and die when all that is needed is rain?

· Why would the Father of all mankind have a Chosen People and favor them over the other nations on earth?

· Why would a God who is “no respecter of persons” prohibit adultery and then bless, honour, and allow to prosper a king who had seven hundred wives and three hundred concubines?

· Why is the largest Christian church controlled entirely by men, with no woman-no matter how pious or gifted-permitted to become a priest, a monsignor, a bishop, an archbishop, a cardinal, or pope?

· Jesus’s last words to his followers were “Go ye into all the world and preach the Gospel to every creature. And, lo, I am with you always.” But, despite this and to this date—some two thousand years later—billions of men and women have never so much as heard the Christian Gospel. Why?

1. How did you feel upon first reading Templeton’s list of questions? Why do you think you responded as you did? 2. Are there questions you would add to the list? 3. What is the place of doubt in your spiritual pilgrimage? What attitudes towards doubt have you noticed in the Christian community? How healthy are they? 4. To what extent have you an examined faith? What plans should you make? How fearful are you of challenges to your faith? Of unanswered questions and doubts? 5. Which questions raise the greatest challenge to your faith? Why? 6. Which questions in Templeton’s list are you convinced you have sufficiently and convincingly answered? Would the nonbelievers in your life concur? Which questions will you need to think through and research? 7. What groups are you in which would profit from working through Templeton’s list of questions? 8. Since it is easy to be dishonest in responding to challenges to our faith, are their nonbelievers (agnostic or atheists) with whom you could meet with to discuss Templeton’s questions? What might they bring to the conversation which could strengthen your faith? 9. Develop a parallel list of questions which believers (theists) could pose for nonbelievers (agnostics and atheists) to consider.