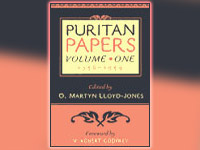 Beginning in 1950, Dr. Martyn Lloyd-Jones began hosting a series of gatherings that came to be known as “The Puritan Conference.” For nearly thirty years evangelical scholars such as J. I. Packer (who had been influential in launching the effort) met to read papers and discuss the rich theological and spiritual heritage that is found in the teaching and lives of Puritans such as John Bunyan, Richard Baxter, and Stephen Charnock. Now 23 papers from four of these annual conferences have been published, allowing thoughtful readers access to them. Puritan Papers can serve as an introduction to the Puritans, and as an opportunity to reflect with evangelical scholars on some of what we can learn from these voices from church history. It will also help to rectify the unfortunate and unfair reputation the Puritans have suffered over the years, such as this barbed comment from Shakespeare in Twelfth Night:

Maria: Marry, sir, sometimes he is a kind of puritan.
Sir Andrew: O, if I thought that, I’d beat him like a dog.