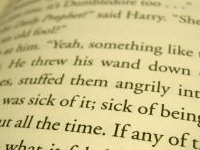 The fourth novel in J. K. Rowling’s Harry Potter series, which hit bookstores in July, represents the largest first printing (3.8 million copies) of any book in U.S. history. In comparison, John Grisham’s best-selling The Brethren, had a first run of 2.8 million copies. It is not only the popularity of the Harry Potter books, however, which has generated attention. Numerous Christians have issued warnings about the series, such as this email I received recently, which judging from the header, has been distributed widely:

>>This is the most evil thing I have laid my eyes on in 10 years, and no one seems to understand its threat. The Harry Potter books are THE NUMBER ONE selling children’s books in the nation today. Just look in any bookstore window.

>>Harry Potter is the creation of a former UK English teacher who promotes witchcraft and Satanism. Harry is a 13 year old “wizard.” Her creation openly blasphemes Jesus and God and promotes sorcery, seeking revenge upon anyone who upsets them by giving you examples (even the sources with authors and titles) of spells, rituals, and demonic powers.

>>I think the problem is that parents have not reviewed the material. Let me give you a few quotes from some of the influenced readers themselves:

>>“The Harry Potter books are cool, ’cause they teach you all about magic and how you can use it to control people and get revenge on your enemies,” said Hartland, WI, 10 year old Craig Nowell, a recent convert to the New Satanic Order Of The Black Circle.

>>And here is dear Ashley, a 9 year old, the typical average age reader: “I used to believe in what they taught us at Sunday School,” said Ashley, conjuring up an ancient spell to summon Cerebus, the three-headed hound of hell. “But the Harry Potter books showed me that magic is real, and that the Bible is nothing but boring lies.”

>>DOES THIS GET YOUR ATTENTION!! If not, how about a quote from the author herself, J. K. Rowling: “I think it’s absolute rubbish to protest children’s books on the grounds that they are luring children to Satan,” Rowling told a London Times reporter in a July 17 interview. “People should be praising them for that! These books guide children to an understanding that the weak, idiotic Son of God is a living hoax who will be humiliated when the rain of fire comes.”

>>Please FWD to every pastor, teacher, and parent you know. This author has now published FOUR BOOKS in less than 2 years of this “encyclopedia of Satanism” and is surely going to write more. Pray for this lost woman’s soul. Pray also for the Holy Spirit to work in the young minds of those who are reading this garbage that they may be delivered from its harm.

The warnings have also appeared in print. World magazine published a cover story on the books, warning that the “children’s literature sensation Harry Potter increasingly descends into darkness… Moral ambiguity and alienation of youth are strong themes in the series.” The stories blend a fantastical world of magic with the more mundane aspects of life, World says, which “may create a problem by putting a smiling mask on evil.” The magic introduces “a relativistic curve ball” into the stories. “The implicit message is that your friend may be your enemy, the person you are talking to might be someone else, and even your pet cannot be trusted.” World identifies several “trail-markers,” truths in the stories which they encourage parents to use to teach older children to think critically. However, the way non-magical characters (“Muggles”) are depicted is another troublesome aspect to the stories. “Ms. Rowling depicts them as clueless irritants, the way an alienated child sees parents,” World says, “Harry Potter’s topsy-turvy moral universe is confusing. That confusion, however, may make the series a hit in a confused culture. Harry Potter is a perfect modern hero for alienated youth. He is an orphan who hates, and is hated by, his adoptive parents.”

All of which provides an interesting exercise in discernment.

1. What is your initial reaction to the email?

2. What would you identify as the “tone” of the email? What impression might it leave on a thoughtful non-Christian concerning Christians and their faith? On a child?

3. Have you read the Harry Potter novels? Why or why not?

4. List the various objections to the Harry Potter novels that are raised in this email, or in World magazine (October 30, 1999; pages 16-18), or that you have heard from other sources. Respond to each.

5. What reasons could you give for Christians reading the Harry Potter novels?

6. Read and discuss some of the positive reviews of Harry Potter published by Christians, including: BreakPoint Commentary #91102 by Charles Colson (breakpoint@lists.netcentral.net), or “Why We Like Harry Potter” in Christianity Today (January 2000; p. 37); or “Harry Potter’s Magic” by Alan Jacobs in First Things (January 2000; pp. 35-38).

7. To what extent are the two sides of this debate open to truly listening and discussing the issues surrounding the Harry Potter books? What does this suggest about the community of God’s people?