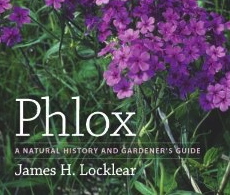 A flower by any other name
If you were to walk around Toad Hall in the summer you’d notice that though the city lot on which it is built isn’t large, the ground surrounding the house is given over to pleasant little garden plots. They are edged with a flowing curve of old bricks set into the ground, or by hunks of limestone set on edge in a line that stretches off to end at a sidewalk. Ornamental grasses and a few fruit trees reach out over an array of flowering plants chosen to attract bees, butterflies, and hummingbirds and to provide a thicket of color during the short Minnesota summer.

In two places around the perimeter of Toad Hall—on the north and south sides of the house—you can find phlox. The ones on the south side produce lovely white blossoms, the ones on the north, pink and purple. No one can remember where the white ones came from, but the others were found via Craigslist. A woman advertised that she was moving and would give perennials to anyone willing to dig them up. We found the price to our liking.

When we first moved into Toad Hall in 1981, Margie did the gardening—I like gardens and flowers and all that but prefer seeing them in films to actually tending them. I also prefer using a snow blower to pushing a lawn mower around so extensive yard work in the heat has never been my idea of a good time. For the past few years Anita (Ransom’s Resident Assistant) has been Toad Hall Gardener, and the place has begun to look like a miniature arboretum. It’s been wonderful.

As I was saying, we now have phlox on two sides of the house. The blossoms are delicate, small, and fragile, and when the flowers are cut the petals tend to fall relatively quickly, meaning the phlox tend to be allowed to remain outside when arrangements are needed for the guest bedroom, dining, or living rooms. They are hardy plants, not needing a lot of attention, and their quiet unassuming beauty yields rich color when they bloom in early summer.

So, I was pleasantly surprised when an email appeared in my inbox from the man who has written the botanical reference book on this genus of flower. He heard me speak in Nebraska, serves as the Director of Conservation at Lauritzen Gardens, Omaha’s Botanical Center. James Locklear wondered if I’d like to see his book, Phlox: A Natural History & Gardener’s Guide. I replied that indeed I would.

Locklear covers all 61 species, providing extensive scientific, historical, botanical, and geographic data for each variety as well as information accessible to the ordinary gardener—and to non-gardeners, like me. Locklear has a wonderful way of introducing each variety, with personal observations and anecdotes collected in the endless hours he has logged traveling and studying this widespread and lovely plant. This, for example, is how he introduces us to Phlox tenuifolia, known as Apache phlox:

The term desert does disservice to the fantastic saguaro forests of Arizona. Defined by the presence of the giant saguaro cactus, there is an exuberance to this Sonoran ecosystem that feels tropical, with cartoonish cacti and prickly shrubs sheltering Gila monsters, elf owls, and more kinds of hummingbirds than you can shake a stick at. Apache phlox leads a quiet life amidst this biological bedlam, a straggling, somewhat woody plant growing among, often within, acacia, jojoba, bush buckwheat, and other shrubs, comprised more of twig than of leaf.

The range of “Apache phlox” is concentrated in southeast Arizona, where once the Chiricahua and other Apache bands held sway. Here it dwells in the sky islands—an archipelago of mountain ranges surrounded by desert basins. Saguaro-thronged desert scrub dominates the lower slopes, while chaparral and Madrean evergreen woodland succeeds it farther up. Apache phlox works its way up into the understory of these xeric woodlands of oak, pine, and juniper, where its creamy white flowers impart a whiff of vanilla to the crackly shade.

And Locklear’s introduction to Phlox speciosa, known as “showy phlox”:

It was the fall of 1809 and in a cabin along the Natchez Trace in Tennessee a man lay dying of self-inflicted wounds. The troubled soul was Meriwether Lewis, who only three years earlier had been hailed as hero of the one of the greatest enter¬prises in American history. But those heady days were past, and the captain of President Jefferson’s celebrated Corps of Discovery was apparently overwhelmed at being a better woodsman, hunter, and botanist than businessman, socialite, and politician.

In Undaunted Courage, Steven Ambrose respectfully wonders about the stream of images coursing through the Captain’s mind as he contemplated ending his life. Perhaps, mixed with that which caused such despair were scenes of the great beauty Lewis witnessed in the untrammeled reaches of the young United States. If so, surely he revisited early May along the Kooskooskee, the Clearwater River of present-day Idaho, where he did his most productive botanical collecting, and discovered one of the most beautiful wildflowers of the American West—showy phlox.

Phlox is a fine book, and even if it doesn’t make you a gardener it will give a reason to be glad, a reason to be grateful, a reason—61 reasons, actually—to look with greater care at the plants we tend to brush by without a second glance. It is the product of someone whose vocation as a horticulturalist has been pursued with both careful scholarship and an obvious love for the handiwork of the Creator. Just to glance through this volume reminds us of the prodigal nature of our God, of the lavishly extravagant way he called the universe into existence and adorned the world with beauty that provides, for those with eyes to see, a tiny shimmering glimpse of the glory that resides in him, world without end. I have a feeling that this next summer I am going to spend some time looking more closely at the phlox growing on two sides of our house. Phlox has helped me to see, and for that I am thankful.