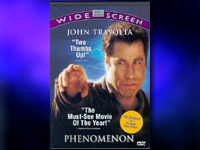 This is one of those relatively rare films that begs to be viewed both as a window of insight into the culture in which we live, and as a point of contact with those who do not share our deepest convictions. Phenomenon is not a particularly great film, but it is certainly worth watching.

There is a growing hunger for spirituality today, a desire for meaning and significance, a craving for some sense that there is more to life and reality than merely the here and now, more to suffering than random pain, and more to death than simple extinction. Phenomenon is a graphic portrayal of the sort of spirituality (amorphous and anonymous) that so many are seeking, and the film invites reflection and discussion on the big questions of life and death.

1. What was your initial or immediate reaction to the film? 2. Why do you think you reacted that way? 3. What is the message of the film? Where do you agree? Disagree? Why? 4. What happened to George Malley, a malignant brain tumor, or a visitation from beyond our world? How do you know? 5 .Were his new powers or skills, in themselves, good, bad, or neutral? How do you know? What assessment of them was implicit in the film? 6. In what ways were the techniques of film-making (casting, direction, script, music, sets, photography, editing, etc.) used to get the film’s message across, or to make the message plausible or compelling? 7. “Some things in life just can’t be explained.” Do you agree? Why or why not? 8. Throughout Phenomenon the theme of trees and leaves appears. (In fact, in the video version which I rented, John Travolta appears walking among trees in an advertisement for Arbor Day just prior to the beginning of the movie.) What is the significance of this theme? 9. To what extent does the spirituality of Phenomenon resonate with Christian spirituality? 10. Trace the religious symbols that are used throughout the film (e.g., the “sacrament” of sharing the apple near the end of the film). To what extent do they add to the impact of the story? 11. Why did the film involve the FBI as it did? 12. Who did you identify with in the film? Why? The townspeople were afraid of George’s new powers. How do you think you would have reacted? Why? 13. Who was George Malley? Did he change in the course of the story? Why? How? What did he believe? 14. John Travolta says—in real life, not in the movie—that “I have a wonderful child and a great marriage because I apply L. Ron Hubbard’s technology to this area of my life. As a Scientologist I have the technology to handle life’s problems.” What is Scientology, and how do its beliefs and claims correspond to the message of the film? Travolta’s comments concerning Scientology, by the way, are found on the Church of Scientology’s website.