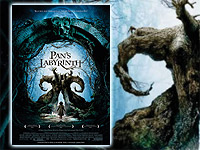 A fairy tale for a broken world: a review of Pan’s Labyrinth

“I hope you enjoy it and get lost in it.”
(Guillermo del Toro, Director’s Prologue)

Imagination is a gift of God. It is the grace which allows us to see beyond what our eyes can register, to know things that though unseen are yet real. It permits us to enter stories which may be fictional, yet which open our eyes to a deeper understanding of life.

“The Mexican-born writer-director Guillermo del Toro,” critic Kenneth Turan says, “is the most accomplished fantasist in contemporary cinema, a master creator of images, atmosphere and mood who uses his visionary’s gifts to do what others cannot: make imaginary worlds seem more real than reality itself.” Pan’s Labyrinth, which del Toro made as a companion piece to his 2001 film, Devil’s Backbone, is a visual feast, a highly compelling example of creative story-telling, and an extended meditation on brutality, innocence, war, imagination, disobedience, and choice.

As the film opens, ten-year-old Ofelia is traveling with her pregnant mother to meet her new step-father, a Captain in the Fascist Spanish army. It is 1944, near the time of the Normandy invasion which brings hope to the rebels fighting the Fascists—sadly dashed—that the Allies will not desert them to Franco’s dictatorship. Ofelia clutches a little pile of precious books, fairy tales into which she escapes from the brutal reality of war and death that rages around her. En route to the remote garrison commanded by Captain Vidal, Ofelia meets a strange, wonderful insect that is really a fairy, a creature from the world in which Ofelia is actually a Princess. In the woods outside the Captain’s army garrison is an ancient labyrinth, in which Ofelia meets Pan, a mysterious faun who tells her she must pass three tests if she is to return to the kingdom where her real father awaits her. The tests are magical and scary, even nightmarish, mirroring not just the cruelty of the battles between the army and the rebels, but equally the deep loss and insecurity which Ofelia inhabits. Del Toro brilliantly cuts between the two stories, so that we easily follow the action in two worlds simultaneously, as it becomes increasingly clear that it may not be two worlds after all. “Imagination is,” Thomas Howard argues, “the faculty by which we organize the content of our experience into some form, and thus apprehend it as significant. Put another way, it is what makes us refuse to accept experience as mere random clutter, and makes us try without ceasing to shape that experience so that we can manage it.” It is in the world of the faun that Ofelia finally finds herself and comes fully alive.

The characters of most fairy tales are often rather simple, not necessarily well-developed, in order to serve as types. So it is here, allowing Pan’s Labyrinth to speak to universal themes common to all of us, in every culture and time. Del Toro quietly references other stories, fairy tales, and artwork in the film, for example, Dorothy’s red shoes from the Wizard of Oz, David Copperfield’s cruelly rejected left-handed hand-shake, and Goya’s “Saturn Devouring his Son.” Del Toro is not just intimately acquainted with fairy tales, he believes in them. Not in the narrow sense that they are all equally true, but in the deeper sense that good stories get at the truth of reality in ways we can barely comprehend in words.

“The myth-maker, the teller of fairy tales, and the writer of fantasy,” Dickerson and O’Hara remind us, “all may speak profoundly to the human soul. They do so through art, and imagery, including the imagery of magic in many of its forms, and as such they speak directly to the soul through the imagination.” A world without such stories is not just poverty-stricken, it is less than fully human. God called us into existence in time; he called us to live in story. At the Fall our stories were violently severed from The Story, and so as sons of Adam and daughters of Eve we feel strangely homesick, lost in the cosmos. In the biblical narrative of redemption, by God’s grace our minds can be renewed and our imaginations can be nourished as The Story gives shape and meaning to the scattered stories of our lives.

Some have objected to Pan’s Labyrinth as being too dark, more like a terrifying dream than a fairy tale. They mistake the good life for a comfortable existence, embrace personal peace as a virtue, and must learn that a good fairy tale, like truth itself, is never safe.

Unlike many films, Pan’s Labyrinth not only is good enough to be seen more than once, it requires more than one screening to take in all the details lovingly crafted by del Toro. It is a wild ride into the world of imagination, full of love and horror, where choices count, where what is real is greater than science can detect, and where life is lived in a fragmented world and in the shadow of death. There are always two questions worth posing when we watch a good film: Do I like it? Do I get it? Even if you answer No to the first questions, Pan’s Labyrinth is worth being able to answer Yes to the second.

1. What was your initial response to Pan’s Labyrinth? Why do you think you responded as you did? 2. Spend time reflecting on the film as a piece of cinematic art: In what ways were the techniques of film-making (casting, direction, lighting, colors, script, music, backgrounds, sets, action, cinematography, editing, etc.) used to get the film’s message(s) across, or to make the message plausible or compelling? 3. Background shapes are important to del Toro. For example, what is the significance of the shape of the great under which the Toad lives? Or the shape of Pan’s head (which also can be seen in the staircase in Captain Vidal’s house)? Or the straight lines that form the backdrop to Captain Vidal’s room and the round shapes that tend to accompany Ofelia? 4. Del Toro has commented that “the rule of three” seems to weave its way through fairy stories—the three little pigs, Goldilocks & the three bears. Thus, he has crafted Pan’s Labyrinth around a series of trinities—identify them and reflect on their significance. (If you can’t find any, watch the Director’s Commentary by del Toro, which is insightful and detailed.) 5. Each time Pan appears in the film, he gets younger. Why? 6. What does the Pale Man represent? His table mirrors Captain Vidal’s table. Why? 7. Pan gives three tests for Ofelia, and she fails two out of the three, yet succeeds. Why? 8. Christians may assume that because the blood of an innocent victim is shed in the final scene, the primary theme of Pan’s Labyrinth parallels the biblical theme of redemption. Del Toro says the story is about Ofelia finding her true self, as having to discover that sometimes breaking the rules is the best choice. “It is not about a girl dying,” he says, “but about a girl giving birth to herself in the way she always hoped she would be.” How do these different themes and mythic images relate? 9. In at least three scenes in Pan’s Labyrinth, del Toro used actual events from the struggle in Spain over Fascism: the soldier’s announcement when distributing bread to the people was what Franco ordered printed on each package of bread provided by his government; the early brutal scene when Captain Vidal beats the young peasant man to death; and the callous statement by the priest at Captain Vidal’s dinner party. What is their significance to the impact of the story? 10. As they drive towards the Captain’s house early in the film, Ofelia’s mother says she must call him “father.” When Ofelia objects, her mother says she doesn’t understand how good the Captain is to them, and besides, “it’s just a word, Ofelia. It’s just a word.” Discuss. 11. Is Pan’s Labyrinth essentially a pagan or a Christian myth? Why? Does it matter? 12. In From Homer to Harry Potter, Dickerson & O’Hara include some interesting questions that could be interesting applied to Pan’s Labyrinth: (1) What is magic used for? Is its goal the domination of wills? What is its end? (2) Are good and evil defined? Are they subjective or objective? What or who is the ultimate arbiter of what is good? (3) Is moral virtue shown to be heroic? What makes a hero a hero? (4) What is the cosmology of the fantastical realm in which the tale takes place? Does the world of the story have a personal and purposeful beginning that gives meaning to its history and to the lives of its inhabitants? 13. What is the message(s) of the film? Consider how the film addresses themes such as the nature of reality or what is really real; what’s wrong with the world, and what’s the solution; the fragmentation of life in our busy, pluralistic world; the significance of relationships and love; the significance and meaning of being human; whether there is right and wrong, and how we determine it; the meaning of life and history; and what happens at death. 14. What is attractive in this fairy tale? How is it made attractive? Where do you agree? Where do you disagree? Why? In the areas in which we might disagree, how can we talk about and demonstrate the truth in a winsome and creative way in our pluralistic culture? 15. With whom did you identify in the film? Why? With whom were we meant to identify? Discuss each main character in the film and their significance to the story.