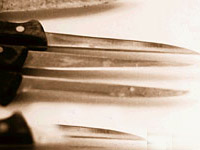 In 1990 a band began performing in small venues in Cincinnati; it took its name from a notorious neighborhood called Over the Rhine. It’s a place where immigrants tend to congregate, a community where fragmentation and dislocation is tinged with hope.

Slow down. Hold still.
It’s not as if it’s a matter of will.
Someone’s circling. Someone’s moving
a little lower than the angels.
And it’s got nothing to do with me.
The wind blows through the trees,
but if I look for it, it won’t come.
I tense up. My mind goes numb.
There’s nothing harder than learning how to receive.
—“All I Need is Everything” from Good Dog Bad Dog

Place and a sense of community is important to Over the Rhine—it’s a primary reason why they haven’t relocated as their popularity has grown. They want to “be surrounded by people who are smarter than we are,” they say, “who are deeper in.” Much of their fan base has grown by word of mouth and through the band’s web site (www.overtherhine.com), a very personal approach in what is often an impersonal, market-driven business.

Over the Rhine is composed of Linford Detweiler and Karin Berquist, a husband and wife whose music is marked by mature craftsmanship, deep reality and lovely grace. Karin has one of the finest voices in all of popular music—one reviewer calls it “sweetly aching”—powerfully poignant, passionately intimate. Her singing seems effortless, bigger than she is, expressive, full of meaning. Linford is a gifted composer and pianist, producing spell-binding instrumentals that match the expressiveness of Karin’s vocals without overwhelming her voice. Linford’s solo instrumental albums, Unspoken Requests and Grey Ghost Stories, showcase his artistry and soothe the soul. They are the sort of CDs where punching play always seems to be followed by punching repeat. One can’t get enough. Together Karin and Linford invite, compel us to reflect on reality of life, and whether the beauty of mercy is possible in such a broken world. These are musicians who have resisted the impulse to dumb things down. They respect the intelligence of their listeners and want to include them in the conversation. This is evident on all their albums, but is strikingly apparent in concert where the intimacy of their music especially shines.

Karin and Linford want their lives to be a work of art, so that there is depth behind their music. “Our work is not any more profound than we are,” they say. Most of their songs are in the first person, an expression of authentic self-awareness which allows them—and through their music, us—to reflect on what all daughters of Eve and sons of Adam face in this dark world. So, for example, on their latest CD, Drunkard’s Prayer, we hear echoes of the pain when their marriage was bent near the breaking point. There is blessing here and curse, both need and grace. In place of sentimentality Over the Rhine does not shy away from looking into the abyss of our sad, fallen world, but insists that against all odds there is a love which can shine light into our darkness.

“The band’s albums are deep and wide, playful and serious, sad and joyful,” Paste magazine says, “full of tiny experiments, rabbit trails and the wine-dark sparkle of inspired phrase. Many people within the music industry and without find it laughable that this gifted Ohio band has managed to stay more-or-less a best kept secret for so long.” Making a living through music—or art of any kind—is a difficult road. “We let go from time to time to rediscover whether we need to keep doing this. We make peace with the fact the experiment might cease,” they say.

Let’s hope the experiment of Over the Rhine continues to flourish for a long, long time to come. Karin Berquist and Linford Detwieler make our lives richer, fuller, more complete with their many layered, creative, lovely music.

I know I’m not a martyr
I’ve never died for anyone but me
The last frontier is only
The stranger in the mirror that I see
But when I least expect it
Here and there I see my savior’s face
He’s still my favorite loser
Falling for the entire human race.
—“Jesus in New Orleans” from Ohio